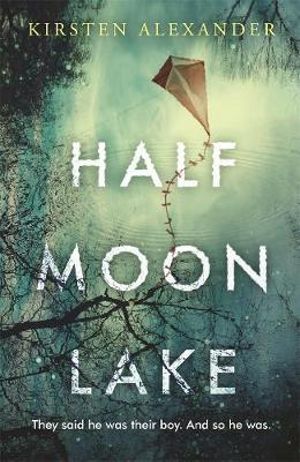 In 1913, on a summer’s day at Half Moon Lake, Louisiana, four-year-old Sonny Davenport walks into the woods and never returns.

The boy’s mysterious disappearance from the family’s lake house makes front-page news in their home town of Opelousas. John Henry and Mary Davenport are wealthy and influential, and will do anything to find their son. For two years, the Davenports search across the South, offer increasingly large rewards and struggle not to give in to despair.

Then, at the moment when all hope seems lost, the boy is found in the company of a tramp.

But is he truly Sonny Davenport? The circumstances of his discovery raise more questions than answers. And when Grace Mill, an unwed farm worker, travels from Alabama to lay claim to the child, newspapers, townsfolk, even the Davenports’ own friends, take sides.

As the tramp’s kidnapping trial begins, and two desperate mothers fight for ownership of the boy, the people of Opelousas discover that truth is more complicated than they’d ever dreamed . . .

Half Moon Lake is Kirsten Alexander’s compelling debut novel, about the parent-child bond, identity, and what it means to be part of a family.

On a summer’s day in southern Louisiana, 1913, Sonny Davenport wanders away from his family’s vacation home at Half Moon Lake and doesn’t come back.

John Henry and Mary Davenport search for their child across the state and throughout the South. John Henry offers an enormous reward for Sonny’s return. Mary turns to spiritualists and occultists. Tom McCabe, a reporter at The St. Landry Clarion, becomes unhealthily attached to Mary and John Henry. After years of crushing disappointments following hope, Sonny is found with a peddler in Alabama. But the Davenports’ joy at finding their son is cut short when another woman, unwed domestic worker Grace Mill, claims the boy is hers.

As the two mothers fight to claim the child, people choose sides, testing loyalties, the notion of truth, and the meaning of the word family.

Half Moon Lake is a work of fiction. There is, however, a fascinating true story that inspired the novel – that of American boy Bobby Dunbar. Reporter Tal McThenia and Margaret Dunbar Cutright tell that story in A Case for Solomon: Bobby Dunbar and the Kidnapping that Haunted a Nation (Free Press, a division of Simon & Schuster Inc, 2012). Should the reader be interested in truth rather than fiction I strongly recommend McThenia’s and Dunbar Cutright’s detailed and compassionate telling of it.

Half Moon Lake takes the reader on a gentle, yet troubling journey deep into America’s south. The premise of this story is the disappearance of the youngest of three boys during a day of unsupervised play, at the family holiday house. What unfolds is the account of how the family reclaim their child after years of separation.

In the aftermath of the boy’s disappearance, his father befriends a local reporter, giving him access to the family’s story in the hope that the media can help lead them to their son. I found this a refreshing viewpoint, giving us yet another perspective form which to understand the family’s decisions. This book also explores relationships between family members and their staff. Nearly fifty years after the Civil War, racial tensions are still evident and class structures protect the wealthy.

The reliance on memory and personal recollections, forms a strong thread of this story – reminding the reader that people can experience the same event, but recall it differently.

Alexander captures the mood of the time and the ways in which privilege allows certain classes to survive or even thrive at the expense of others. I enjoyed the steady pace, behind which the urgency of the story and the way in which the truth was perceived, built to a strong climax. I enjoyed the depth of characters Alexander assembled to layer her story. These characters were convincing and worked well to showcase the unofficial hierarchies and rules within which the towns-people must live.

In a time of fake news, where power belongs to those who can pay, I found the themes relevant to our current times. Alexander promises another book – let’s hope it brings forward the next stage in this intriguing saga.