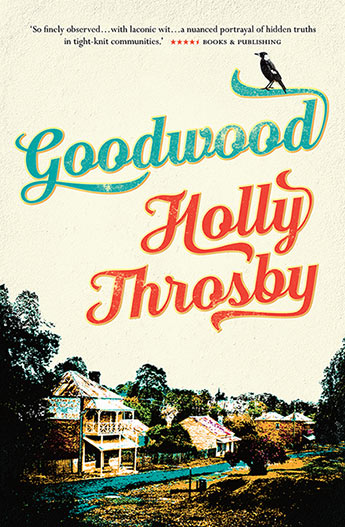 Goodwood is a small town where everyone knows everything about everyone. It’s a place where it’s impossible to keep a secret.

People die in Goodwood, of course, but never like this. They don’t just disappear.

As the intensity of speculation about the fates of Rosie and Bart heightens, Jean, who is keeping secrets of her own, and the rest of Goodwood are left reeling.

Goodwood is a small Australian town where, like many small communities, everyone knows everything about everyone (or thinks they do). In 1992, the 17-year-old narrator of Goodwood, Jean Brown, finds $500 hidden in a tree trunk – a small fortune, as Jean excitedly tells us. Fearful of being observed, she leaves the money and decides to return in a few days and see if it’s still there for her to claim.

Two days after Jean finds the money, Rosie, the cool girl in town, disappears and then Bart McDonald, Goodwood’s popular and likeable butcher, vanishes on a fishing trip. Apart from both being popular, they appear to have nothing in common. Goodwood lights up like a powder keg with speculation, fears, and endless theories about the fate of these two very different characters.

Jean finds herself attracted to Evie, the new girl at school – ‘the prettiest girl she’s ever seen in real life’ ­– while dealing with the advances of one of the more sensitive, likeable boys, Ethan. When she returns to the tree, the money has vanished and in its place is a plastic toy horse.

And so begins the intriguing set-up of Goodwood, which hooked me immediately.

I really enjoyed Holly Throsby’s debut novel, Goodwood, published by Allen & Unwin. Throsby is a musician and songwriter, and is well used to words building a rhythm to tell a story, which shows in the prose.

The town is deftly portrayed and believable. Those of us who have grown up in small communities will nod and smile over passages. I love the droll, dry humour in some of the writing. There were also moments of pathos, such as with Ethan and the scars on his back from the beatings he endures from his father.

The relationship between Jean and her mother and also the Nan are lovingly portrayed. Some of my other favourite characters are the police chief Mack, and Bart’s autism-spectrum, horse-mad daughter Pearl.

Evie didn’t work as well for me, particularly the scene where she makes a pass at Jean as a new girl in the assembly. Of course, high schools and new girls may have changed dramatically since my own long-ago school days.

There are a lot of characters and it can be difficult keeping track of them, but it didn’t detract from the enjoyment of the story.

Goodwood isn’t so much a whodunit. It’s fairly easy to pick early on what’s happened with the seemingly disparate disappearances, so don’t expect twists that will make you gasp. But it’s a beautifully observed observation of the ripple effects of two disappearances on a small community. Everything wraps up neatly at the end and the mystery of the missing locals solved – together with resolution of the money and the plastic horse in the tree.

I love the stunning book cover design by Sandy Cull, which fits the text perfectly and evoked a retro Australian town feel.