J.M., congratulations on your new novel. As a reviewer commented on your first book in the Stella Hardy series, you offer “a mixture of humour, heart and action”.

Your protagonist works for WORMS (Western and Outer Migrant Services). Have Stella and her environment changed since her first adventure, in Good Money (2015)?

Yes. I think it is inevitable that the facts of Stella’s life change over time. But what’s important is that the voice stays constant. I did find this quite a challenge, trying to maintain a constant ‘Stella’ voice, which readers have already become attached to, while bringing in new characters, new situations and even a change of attitude on Stella’s behalf.

The events in Too Easy occur in the lead-up to the Melbourne Cup. What gave you this idea and how did you make use of it?

The first book takes place around the Queen’s Birthday weekend in June. I liked having the plot anchored in time, so that along with a clear sense of place (i.e. Western suburbs), there was also a clear sense of the time of year. I decided to continue that in book 2 and what particularly attracted me to the spring racing carnival in Melbourne is that it’s a bit chaotic, people walk around drunk at 11am, there are crowds of people in fancy frocks on the train. It has its own glamour and a certain darkness as well that I really wanted to capture.

An art show that is to open on the night of Melbourne Cup Day is another moment toward which the action moves. How much plotting and planning did you do to manage these two plotlines?

I like to have several lines of plot going that hopefully meet at the end. So, having a date when everything comes together helped with the plotting. I probably did do more planning for Too Easy than I did for Good Money, and I am doing even more planning and plotting for book 3.

Stella’s best friend, Phuong, is back – what has been happening in her life?

Dear Phuong, I am very fond of this character, and with her self-contained reserve, she is a wonderful foil for the rambunctious Stella. Unfortunately, she has become involved with a fellow police officer who is not entirely a man of good character, not what you might call ‘a stand- up guy”.

The Corpse Flowers are mentioned early in the novel. Who or what are they, and why should Stella care? 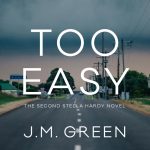 The Corpse Flowers are a bikie gang. Some members of the newly- formed police unit that deals with gangs have become a bit too chummy with them, to their detriment. Stella cares because Phuong cares (see unsavoury relationship mentioned above) and Stella cares about Phuong.

Stella mostly gets around on public transport. Sometimes she walks, takes a taxi, scores a lift with an associate, or drives herself in a randomly acquired car. Most writers want their investigators to drive from A to B as quickly as possible, but you make Stella’s movements more haphazard. Why’s that?

Being in traffic a lot, I mean, that’s Melbourne. Most of us take public transport too. As a narrative device, sitting on idle trams gives Stella time to reflect and to read. I have a reader in the States (he stumbled on my website and sourced the books, though I’m not published in the US) and he told me he was shocked at just how much Stella uses the public transport. I suppose that unless you live in New York, Americans drive everywhere it seems. Even around the block.

Homeless young people and house fires that kill recent immigrants are two of the social issues that take Stella to Parliament House to chase funding. Her career is in the ascendant?

Nah, she’s too much of a slack arse to be a real careerist. She cares, she tries to help her clients. But she isn’t one for schmoozing, and networking and all that.

With her life at risk, Stella finds sanctuary in a refugee household in a suburb with a high murder rate. Phuong’s cousin, who’s also in danger, hides with a community of Buddhist monks. Stella recalls her childhood: “The security and predictability of my home life,with [the] homogenous white faces of the small Mallee town …”. Any comments?

Stella is both grateful for and critical of her home town. She acknowledges that in places like Braybrook and St Albans children are exposed to unsavoury conduct, like public drinking and drug taking, and have high levels of theft, vandalism, and violence. The fact that rural communities have traditionally had low crime rates is changing with the ubiquity of the drug Ice in regional towns.

A personal question: would you like to tell us about the woman to whom you dedicate your book?

Doreen was my mother, who passed away in October 2016. She was a great influence on me, as mothers are, especially my love of readi

ng. She was an avid reader and frequent public library user. I didn’t like reading when I was younger and she nearly despaired, but her example stayed with me, and later I became an avid reader.

And finally, what can we expect after Too Easy?

Stella number three is hush hush. No title made public yet. And no hints either, sorry Robyn!