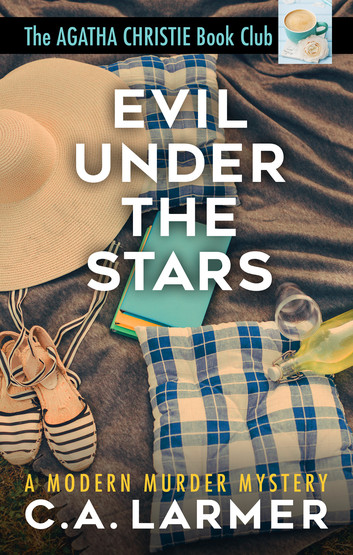 The champagne is flowing, the movie is showing, and a killer is lurking just blankets away…

When the Agatha Christie Book Club reunite to watch Evil Under the Sun at a moonlight cinema, they quickly find themselves face-to-face with evil under a star-lit sky. A woman has been strangled in a public park, with hundreds of witnesses and not a suspect in sight.

How did no-one see the killer lurking? How did no-one hear the victim scream? And how could the gang have been lounging just metres away and missed the whole event?

When local detectives hit a brick wall, the book club do what they do best, channelling their inner Miss Marple to help out. What eventuates is a true battle of wits between our amateur sleuths and the Homicide Squad, with newcomer Detective Inspector Liam Jackson caught firmly in the middle.

This is the third book in C.A. Larmer’s engaging series about the Agatha Christie Book Club. The members of the book club have become friends via their common interest in Agatha Christie’s books and this is not their first involvement in solving a murder. They are an eclectic bunch – sisters Alicia and Lynette, librarian Missy, gay palaeontologist Perry, medico Anders and elegant vintage clothing retailer Claire – and their lives in inner Sydney as well as their relationships with each other are convincingly and often amusingly portrayed. From one perspective they are a group of well-meaning but annoying busybodies who make life difficult for Alicia’s police detective boyfriend, DI Liam Jackson, and his stern, superior officer who does not approve of private citizens interfering in police investigations. However, the clubbers – who model their investigatory techniques on Miss Marple and Poirot, as well as clues from various Christie mysteries – seem able to track down vital information that the police have failed to discover. A solution to the murder here is very challenging indeed. A woman is strangled but although there are hundreds of people present watching the film of Agatha Christie’s Evil Under the Sun, apparently nobody saw or heard anything. Possible suspects have alibis. Undeterred, the clubbers pursue various leads and uncover aspects helpful to resolving the crime while trying to rebuff police objections to their unofficial enquiries. In addition to Christie fans, readers who like cosy, humorous, entertaining mysteries will like the book. It is well-written but I think the author should look for some alternatives to overuse of ‘smirk’ whether as a verb or a noun.