Join us for champagne and canapés as we celebrate Australia’s crime-writing talent at Sisters in Crime’s Scarlet Stiletto Awards. This year, 186 entries vied for glory, but only 26 stories were shortlisted for the 13 awards (Scarlet-Stiletto-entry-form-2017). Catch up with your favourite authors including Anne Buist, Hazel Edwards, Sandi Wallce and Narrelle M  Harris.

Before presenting the awards (and the coveted Scarlet Stiletto trophy), Sigrid Thornton will discuss her ‘life in crime’ (and much more) with crime author and performer Jane Clifton. 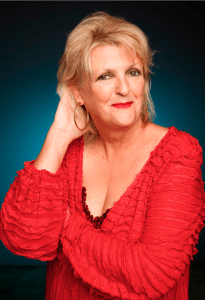 Jane Clifton – author, actress, singer and registered civil celebrant – is still most famous for her role as bank robber Margo Gaffney in Prisoner (1980–84), the show on which Wentworth is based. Ironically, Prisoner was one of the last shows that did not pay its cast for repeats.

In the late 1970s, Jane was a member of New Wave band Stiletto. As well as singing and performing in stage shows such as Menopause: The Musical, Jane has also written a memoir and three crime novels. Between performing, she works as a civil celebrant and is also a driver for the all-female ride-sharing service, Shebah. Jane is often asked if there is anything she can’t do, to which she simply replies, ‘Ballet and make money.’ She has finished her fifth novel, which is not crime, but she promises she will be returning to a life of crime with Flash, a sequel to Flush.