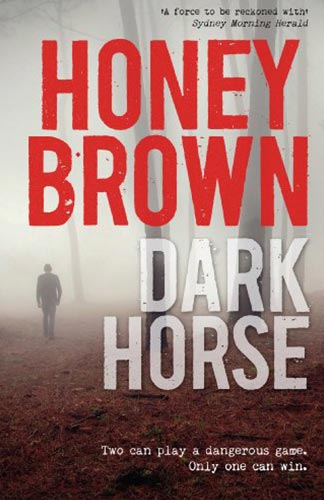 Dark Horse opens Christmas morning as Sarah Bernard, recently divorced from a cheating husband, leaves her dream property – now on the market – by horseback, headed for the seclusion of Devil Mountain in Victoria’s Mortimer Ranges. The ‘dark horse’ she rides is Tansy, ‘sulky, moody, headstrong, bursts of bad behaviour, while still fragile inside, quick to feel lost and rejected.’ From the onset, you wonder whether the descriptions of Tansy might apply equally to Sarah.
Sarah battles extreme weather including flash floods before reaching the shelter of a workman’s camp alongside the historic Hangman’s Hut, which is under renovation. But her solitude is interrupted when a strange man appears, stuck in a bog. Handsome and charming, with an apparently damaged knee, Heath doesn’t appear dangerous. But as circumstances bring them closer together, Sarah’s suspicions grow.
The quality of the writing puts Brown’s thrillers in a class of their own. Dark Horse shares with Brown’s other novels a tense, erotically charged, unpredictable atmosphere – one in which the hunted might become the hunter. Brown keeps you guessing, tapping into your primal fears while at the same time making you question the assumptions underlying those fears. Review by Angela Savage

Sarah Barnard is traumatised by her broken marriage and the failure of her riding business. She avoids the disapproving scrutiny of her parents on Christmas day by heading for the hills on her beloved mare Tansy. A sudden storm washes away a bridge and they are cut off. In the shelter of a workman’s hut and with some food supplies she took with her Sarah can sit out the storm and work out a way back later. Her isolation suits her mood but suddenly a man’s voice calls for help. When she finds a good-looking stranger called Heath she discovers that he, too, has been trapped and injured by the storm. Now they have to wait out the situation together in an Australian bush setting that would be familiar to most of us.
As they get talking, Heath’s story about how he turned up at the hut starts to worry Sarah. It seems very vague and at the same time as she is beginning to be attracted to Heath she becomes more and more concerned about who he is, why he is there and whether he represents any danger to her and Tansy. Heath and Sarah’s mutual attraction grows and eventually becomes physical but there is still a sense of impending danger. Strange things happen and you are never really clear about who can be trusted. Heath’s story may not be true and Sarah’s fears are convincingly conveyed at the same time as she lets herself become sexually involved with him – in part at least to protect herself and her horse. Her almost mystical devotion to Tansy adds another dimension to Sarah’s fears, even though Heath seems keen to protect the horse. But is Sarah a trustworthy narrator? She may not be revealing her whole story either. These are characters we seem to know and understand only partially. Then comes a twist that could not have been foreseen and a further revelation that takes the final part of the story in yet another direction.
Honey Brown is a good psychological suspense writer, as her earlier novels have shown. Dark Horse maintains the page-turning suspense you want in such thrillers but in my view would have benefitted from some editing. There is a fine line between delineating the minutiae of foreboding required and including too much unnecessary detail. But fans of suspenseful thrillers with a touch of erotica – particularly fans of Honey Brown – will enjoy this book. Review by Lesley Vick