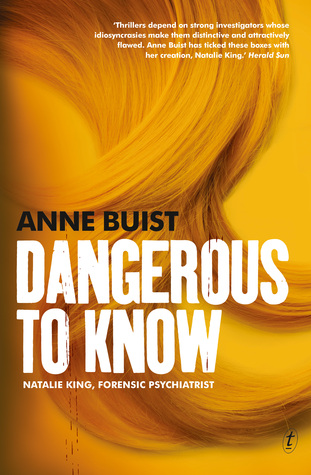 Natalie King is back: back from a stay on the psych ward. Her reluctance to live a quiet life has contributed to a severe depressive episode, and now it’s time for a retreat to the country. A borrowed house on the Great Ocean Road; a low-key research job at a provincial university nearby.

But Natalie and trouble have a strange mutual fascination. Her charismatic new boss Frank is friendly, even attractive. But it turns out his pregnant wife is an old enemy of Natalie’s. And when Frank’s tragic personal history is revealed—then reprised in the most shocking way—Natalie finds herself drawn deep into a mystery. And even deeper into danger.

Like her first offering, Medea’s Curse, the novel is different, compelling and, at times, almost overwhelming. The heroine, Natalie King, a psychiatrist, suffers from mental illness herself.  As she battles increasingly dangerous and murky emotional waters from what was meant to be a retreat, located along the Great Ocean Road overlooking the southern shores of Western Victoria, she must also monitor her moods and energy according to the amounts of the drugs she takes that are in her body at any time. Hence, the reader becomes privy to treatments for various mood disorders, as well as the effects these have on the sufferers, and the uses of different therapies.

Her recovery from a major depressive episode rather ruins her punk rock life-style as a part-time singer and general rabble-rouser. She realises she must rest and give up living on the edge if she is to manage her illness. Nevertheless, she continues to analyse a woman, who has been accused of killing her three children and to give evidence at her trial. She also joins a research team based in Geelong, tries not to find her new boss as attractive as he wants her to, or antagonise his wife who is an old foe. Before long she finds herself mired in his problems and tragedies too, and in great danger as she tries to find why both his wives have died at thirty-nine weeks of pregnancy.

Looking into the past history of her boss is sometimes hard to follow as the story zigzags into the atrocities visited upon past generations of his family in Serbo-Croatia and strange happenings at the sinister family mansion, Mount Malosevic. The names and relationships of people are complex and require no small concentration to untangle. Yet therein lie the answers to Natalie’s questions about the deaths, and an attempt upon her own life. The tragedies that unfold have the magnitude and horror of Greek tragedies of old, the reason that they still form the templates for some modern psychiatric scenarios. The characters and denouement are sad and cruel. I am not sure that her mentor’s advice, ‘Be careful, Natalie. And get him into therapy.’ (p.271), is really going to be enough to salvage the human wreckage in this one where it seems almost everyone is sad, bad, and or dangerous to know.

A major theme, which could be more fully explored, is the nature of female power, through the ability to bear children, and the way in which that can be traduced into forms of submission and servitude by the stronger desire of certain women to have a ‘perfect’ relationship with a powerful male figure.

The novel’s themes are hard to take and not to be recommended if you are pregnant, or cannot bear the thought (or the sight) of babies being killed. Otherwise, this is a striking and tension-filled read that delivers information on states of mind, dissociation, and heritable afflictions, together with the scary solution to the poignant deaths.