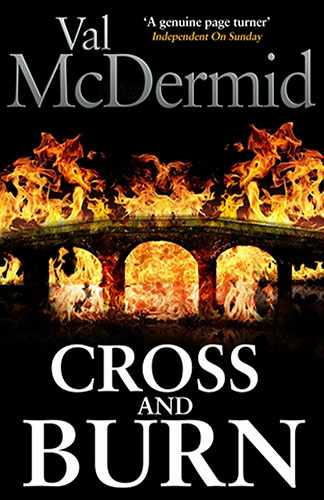 Author: Val McDermid
Publisher: Little Brown
Copyright Year: 2013
ISBN: 978-1-4087-0455-4
No of Pages: 438
Review By: Ann Byrne
Book Synopsis:
Guilt and grief have driven a wedge between long time crime-fighting partners psychologist Tony Hill and ex-DCI Carol Jordan. But just because they’re not talking doesn’t mean the killing stops.
Someone is killing women. Women who bear an unsettling resemblance to Carol Jordan. And when the evidence begins to point in a disturbing direction, thinking the unthinkable seems the only possible answer.
Cornered by events, Tony and Carol are forced to fight for themselves and each other as never before.

“The hardest thing in life is to know which bridge to cross and which to burn” – David Russell.

Before I started Cross and Burn I had just been talking to a friend on how we make decisions in life and this quote seemed very apt to that conversation. It is used in the book in a counselling session between Tony Hill and his counsellor, and neatly ties up one of the dilemmas that he has to face in of Cross and Burn. Such a clever writer to pick a phrase that makes the reader think not just about the plot but also decisions that we make in our lives , but then that is Val McDermid – as they say in the promo – the “Queen of Crime”.

Cross and Burn is the 8th in the Tony Hill series and a fitting extension to The Retribution. It is classic McDermid with a serial killer who thinks extensively about his killing strategy and puts it in place with precision.

There description of what the killer does to the women was disturbing for me with the hairs on the back of the neck hairs standing straight up, I do wonder why Val has such violent images when a lesser description would have sufficed. As always the plot shifts with precision between the killer, the police, and the victims whilst providing snippets for the reader to try and connect. We are often ahead of the police in our knowledge which also adds to the tension.

The writing is fast paced and has that not put down quality that we expect from McDermid. If one is interested in psychology and the thinking process Tony Hill provides additional insight.

Another one for Mc Dermid lovers.