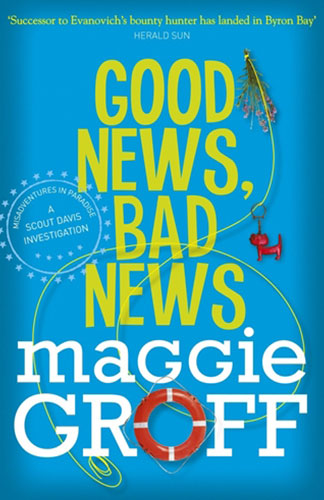 Author: Maggie Goff
Publisher: Pan Macmillan, Australia
Copyright Year: 2013
ISBN: 9781742613802
Review By: Diana Olsberg
Book Synopsis:
Intrepid investigative journalist Scout Davis has given herself a holiday, but when Hermione Longfellow floats towards her in the supermarket, wanting to engage her services, she stops to listen.

Most people in Byron Bay are aware of the eccentric Anemone sisters. Always dressed in black, they rarely leave their home nestled in the hills – but Scout is sure that the drinking of chicken blood is just idle gossip. When Hermione asks Scout to track down sister Nemony’s AWOL husband, believed to have died at sea thirty years ago, but recently popped up again on the Great Barrier Reef, Scout, checking there is no eye of newt in Hermione’s shopping trolley, jumps at the chance.

Another source of intrigue falls close to home when Scout’s sister Harper despairs over her husband’s odd behaviour. And if that weren’t enough, Scout’s journalist boyfriend is finally coming home from Afghanistan. Trouble is, Scout thinks she may be falling in love with irresistible local cop Rafe – who coincidentally is also Toby’s best friend…

What a delightful and engaging romp is this second book by Maggie Goff in the stories of investigative journalist Scout Davis. Davis on the trail of a 30 year old cold case involving all manner of intrigues – murder, multiple bigamy, insurance fraud, money laundering for drug cartels – is at the same time enjoying some quite titillating steamy lovemaking. All this makes for an exciting read that keeps you wanting to get back to the book despite the pressures of more prosaic demands.

The perturbations of the case itself are equally matched by the complexities of Scout’s family relationships, the dramas besetting her sister Harper, long standing intrigues around a family of three sisters who originally set Scout on the case, and the comings and goings of various other friends and neighbours.

Most particularly it is Maggie Goff’s easy writing style and good interplay between the plot, the dialogue and the mental scenarios revealed in Scout’s fantasies or her discussions with her peripatetic cat Chairman Mao which keeps the reader involved throughout the book.

Great delight too is the setting for most of the book in Byron Bay in Northern New South Wales, a town Goff so aptly describes as “a carnival of high spirits”. Scout’s investigations also take us down to Sydney and up onto the Queensland Sunshine Coast in the Whitsunday Islands. For those familiar with these spots, some of Goff’s descriptions are like looking through your own family album, the delight of recognising so many of the sights, sounds and even smells of familiar places. No doubt too, Goff’s descriptions will encourage others to visit these places and boost tourist numbers. Some of the descriptions of the Whitsundays in particular must outrank any of the best Trip Advisor plaudits.

I’m now about to seek out the first Scout Davis book Mad Men, Bad Girls, and I look forward to Goff’s next instalment, Dark Cloud, Silver Linings, currently in progress.