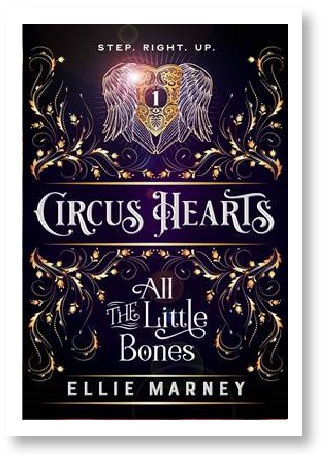 A teenage trapeze artist and an apprentice strongman on the run from a terrible crime…
Seventeen-year-old Sorsha Neary’s life is changed in one night when she defends herself behind the vans of her family circus troupe. Now Sorsha and apprentice strongman Colm Mackay are travelling south, to evade the fallout and escape the long arm of the law. All they have in their favour is talent, an old promise, and slim acquaintance with the crew members and performers of their new home, Klatsch’s Karnival. But the question for Sorsha and Colm isn’t if the police will catch up with them, but when…

Ellie Marney’s Every… YA trilogy was fantastic, especially with it’s brushes of Sherlock Holmes characters and canon over its story of James Mycroft and Rachel Watts stumbling into crime (and into love) in an Australian setting. I’m delighted to find that the same deft gift for depth of character and neat plotting continues in the first of this new series.

I’ve read a few circus-themed books over the years, the most recent being Erin Morgenstern’s The Night Circus, which was all poetry, mysticism and elegant Victorian-era repressed romance fantasy.

Ellie Marney’s All the Little Bones (the first of the Circus Hearts trilogy) has a lot more crunch and texture. The sweat-and-greasepaint reality of it is more along the lines of Marion Zimmer Bradley’s The Catch Trap, but unlike that 1940s-50s-set and fairly brutal and unhappy exploration of queer love, All the Little Bones gives the reader both a gripping back story, and a romance with a kinder heart.

All the Little Bones follows Sorsha Neary, a teenaged trapeze artist, on the run from her family circus troupe after defending herself from an assault. The troupe’s apprentice strongman, Colm Mackay, is charged with taking her to safety, south to Klatsch’s Karnival.

Colm is supposed to be looking after Sorsha, not falling for her, especially as he was a witness to what happened. Sorsha is having nightmares, and when they finally reach the relative safety of Klatsch’s, not everyone is welcoming. The young pair have to negotiate their precarious situation with the law against trying to fit in to the new circus, along with the emotional fallout of the crime and how they are feeling about each other.

There’s a lot to juggle (pardon the circus pun) but Marney keeps everything at the perfect pitch and the perfect pace right to the end, when disaster of more than one kind brings everything to a head. The story handles the instigating crime and its consequences intelligently and compassionately, and while motivations can be doubted, the story is subtle enough not to have an outright, irredeemable villain. (Well, maybe one.)

It’s great to see the next book in the series, All Fall Down, builds on the events of All the Little Bones – I look forward to reading it soon!