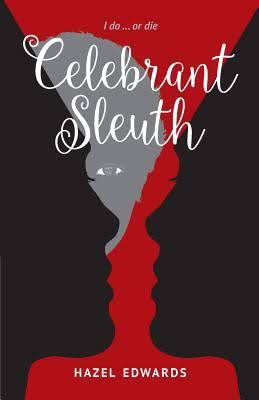 ‘I buried my father, married my sister and sorted the missing will.’‘

Quinn, a celebrant with style and a few obsessions but a good heart, solves quirky problems, mysteries and the occasional murder at weddings, funerals and naming ceremonies in her country town.

Ex-actor with a great voice who writes eulogies to die for! Not forgetting a few quotable ‘Quinn’s Laws of Relativity’. A romantic, but asexual, Quinn lives with her long term partner Art who runs community Channel Zero.

The work style of a celebrant is never routine. Fake I.D. Fraud. Fights, even to the death, over wills and inheritance. Mislaid rings. Lost bride. Food poisoning. Clients of various ages and cultures are well looked after. Even vintage millionairess Flora with the much young lover who might be a con- artist.

Quinn solves most problems but not always in the expected way.

The recent NY Rights Fair highlighted the wealth of opportunity for authors to have their books optioned for TV streaming platforms such as Netflix, Stan, Hulu and more… indeed the statistic cited was that there were currently around 540 scripted shows in development and production. I can’t but help think that Celebrant Sleuth would make a superb television series insofar as we have an unusual lead character (a romantic but asexual actor called Quinn in a long term but unconventional relationship) who presides over weddings, funerals, naming ceremonies and more in her country town in regional Victoria, Australia but also solves mysteries along the way. I expected the book to be one crime story but instead it offered a series of vignettes or episodes that invariably have an unusual death or accident at their centre. Quinn sets out to get to solve them with her entourage of friends assisting or providing insight along the way. Whether it is a murder or death by misadventure or natural forces at its core, Quinn invariably finds the answer. One of the best facets of this book is that it provides the reader with an understanding into a celebrant’s life and the problem solving that goes along with dealing with conflict from people with oppositional psychological profiles or cultural backgrounds. Ultimately, the celebrant is the peacemaker in her professional and personal life. I have a lot of respect for the author Hazel Edwards, as she always offers an unusual angle or character in her books that reflects the zeitgeist… in this case, in the theme of accepting diversity. I hope this book finds its way onto TV. ABC or SBS or FOX (Australia) take note