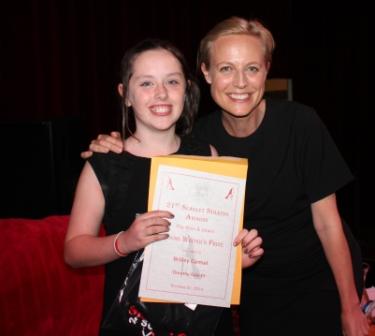 Entries are open in the 22nd Scarlet Stiletto Awards and organisers, Sisters in Crime, are looking for young female writers with a passion for murder and mystery to enter the junior competition.

Murder at the ballet excursion, blackmail in the principal’s office or theft on the netball team – what will this year’s crop of young female crime writers come up with for the under 18 section of the Sisters in Crime crime-writing awards?

Publisher Allen & Unwin is offering a $500 prize for the best short story written by a girl under 18 as part of Sisters in Crime’s 22nd Scarlet Stiletto Awards … and schools are being encouraged to help their students turn their writing skills towards mystery and mayhem.

Last year’s winner was an 11-year-old primary school student from the Mornington Peninsula, Bridey Carmel, who won for Dorothy Gale P.I. – a story about an investigator sent by tornado to a wonderful land, just like Dorothy from Kansas, but with the twist that she must unravel a spate of mysterious deaths.

The competition is open to secondary and primary school girls, but  younger writers need not think they have no chance of success; the youngest winner of the Allen & Unwin prize so far has been an eight-year-old, who wrote about an axe-murdering relief teacher.

Student entrants in previous years have written about thefts of Tim Tams from the school staff room and a teacher’s past coming back to haunt her. Others put school as secondary to the junior protagonist’s main activity: a 2008 winner set her crime amid a worm farm, where thefts of the worms were tied into a spate of local robberies, and the schoolgirl detective hoped to solve the mystery in time to finish the homework set by her evil teacher.

Some students, however, have come up with plots and settings that could easily be constructed by and for adults. The 2013  winner was a 15-year-old Brighton East schoolgirl, Sarah Robinson-Hatch, who won for Just one Touch – the tale of a vigilante named Ruby Sykes, who gained a special power after a lightning strike. That power went to her head – and her hands: young Ruby is able to kill people by electrocuting them, and decides to use this new skill to wipe out the world’s baddies. Sarah was also a joint winner in 2011, and last year became a Sisters in Crime reviewer for Young Adult fiction.

Sisters in Crime’s spokeswoman Carmel Shute says that each year the junior writers produce a great variety of plots, and the hope is that these young writers will go on to enter the competition’s adult sections. The first youth writing prize (when the competition was open to women under the age of 25) went to Canadian-born model Tara Moss, who has gone on to a very successful crime-writing career.

Female-authored crime writing seems to be growing in both numbers of writers and breadth of subject and content. The adult competition this year includes sections for environmental crime, financial crime, romantic suspense, disabled protagonist, indigenous writer and many others. Perhaps the most challenging section is the Athenaeum Library’s prize of $1000, with the runner-up to receive $500, for the best crime story that includes the words “body in the library”.

Entries close August 31, and winners will be announced in November.