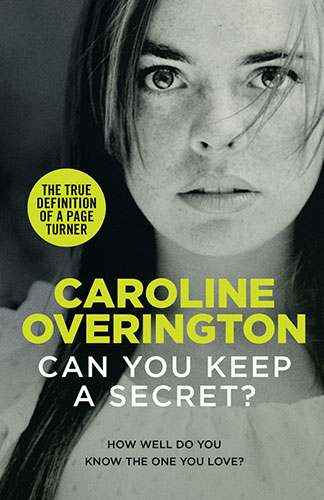 Author: Caroline Overington
Publisher: Random House
Copyright Year: 2014
Review By: Anne Elizabeth Bruist
Book Synopsis:
The year is 1999, and Lachlan Colbert – Colby – has the world at his feet. He’s got a big job on Wall Street and a sleek bachelor pad in the heart of Manhattan. With money no object, he and his friends take a trip to Australia to see in the new millennium. And it’s there, on a hired yacht sailing the Whitsundays, that he meets Caitlin. Caitlin Hourigan has got wild hair and torn shorts – and has barely ever left the small patch of Queensland where she grew up. But Colby is smitten and for Caitlin, a girl from the wrong side of the tracks, a blissful future awaits – marriage, a big house, a beautiful little boy. But nothing is ever as perfect as it seems. And for Lachlan and Caitlin the nightmare is only just beginning.

This is the sixth novel from an award winning journalist, now associate editor at Women’s Weekly, but the first I have read.

“Why do some people decide to get married when everyone around them would seem to agree that marriage, at least for the two people in question, is a terrifically bad idea?”

This is the opening gambit on the back page, before we are told Colby and Caitlin get together and the nightmare begins. The front cover has it as the “true definition of a page turner” and in small print: How well do you know the one you love?

With this lead in, and no previous experience of the author (which may or may not have been a guide) I was expecting a Gone Girl type thriller. The prologue has us in the future with a house burning down and a missing child we are told was adopted and it “hasn’t been gong that well’, so all in keeping with the back cover. So I was somewhat surprised by what seemed much more romance/family drama—well for the first half! So much so that if Colby and Caitlin from the back cover hadn’t appeared on the pages I was reading, I might have thought it had mistakenly been given the cover of a different book.

Expectations realigned, we follow the developing relationship (third person point of view) between a naive country Queensland girl, Caitlin, who is 1999 doesn’t know there is a type of coffee other than instant Nescafe, and sophisticated New Yorker Colby. It’s made plausible by the fact that Caitlin dropped out of school and normally works in a dubious pub, but is pulled into crewing on a Whitsunday yacht for a bunch of rich New Yorkers with more money than sense. Both our protagonists have a troubled background, and youth and Caitlin’s being miles away from the stress of Wall Street make the attractive more than possible. A little harder to believe is that after the holiday romance Colby stays in touch and eventually (as we watch the calendar years in anticipation) brings her to New York for a holiday. The inevitable happens—but rather than being a major feature of the book, Overington uses historical events as a reason Caitlin can’t go home, and a spur for their precipitous marriage. If for no other reason we want Colby to go ahead, ill-suited as they may be, just to stick it up his odious mother.

We see a bit of their difficulties and Caitlin’s struggles, particularly when they can’t have children—and then they decide to adopt.

From page 197 where we now find ourselves, the novel changes completely in tone, point of view and pace. Up until almost the end (page 361) it is now told in blogs, first person Caitlin, with “online” comments from someone we come to know and another who we guess at. Up until this change I hadn’t been grabbed—but after it, yes it was a page turner and I didn’t stop until finished in the early hours of the morning. In the “blog” I started to care about Caitlin, and though aware of her being a potentially unreliable (one-sided) narrator, the deteriorating marital situation began to reveal. The blogs are about the pitfalls of adopting an older child, and we feel for her, however naïve and misguided she may have been.

I didn’t see the twist until a few pages before and am not sure if I liked it or not—endings are always so hard! But Overington certainly makes you want to keep reading through the second half, and makes you think. Don’t get too fussed about the title, or the back blurb, think of it as being in two halves and just sit back and enjoy.