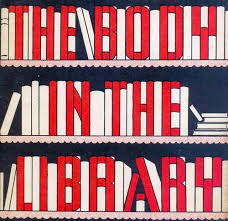 For the past six years, the Body in the Library Award offered by the Melbourne Athenaeum Library has been one of the most popular categories in Sisters in Crime’s annual Scarlet Stiletto short story competition.

The winner takes home $1000 in prize money with $500 going to the runner-up. This partnership has seen the number of entries grow each year, clearly a prize worth killing for.

In 2017, four of the winning stories overall involved ‘the body in the library’.

The 2017  Body in the Library Prize was won by Narrelle M Harris (Melbourne, Vic) for “Jane”. Harris writes crime, horror, fantasy, romance and erotica. Her 30+ novels and short stories have been published in Australia, US and UK Award nominations include Fly by Night (nominated for a Ned Kelly Award), Witch Honour and Witch Faith (both short-listed for the George Turner Prize) and Walking Shadows (nominated for the Chronos Awards and shortlisted for the Davitt Awards for crime writing).

The runner-up prize went Natalie Conyer (Mosman, NSW) for “In Memoriam”. Conyer describes herself as a late-onset writer scrambling to make up for lost time. She’s read and loved crime fiction all her life, so much so she’s now doing a doctorate on it, hoping to finish before she loses her marbles completely. She is a serial offender in the Scarlet Stiletto Awards. She won 3rd prize in 2015 and the overall Body in the Library Award in 2014.

The Body in the Library Award, of course, honours Agatha Christie and her pioneering 1942 Miss Marple novel of the same name. In her witty foreword, Christie describes ‘the body in the library‘ as a cliché of detective fiction and her novel consciously (and ironically) reworks the genre. 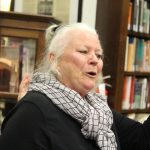 Last year, the Melbourne Athenaeum Library hosted a well-attended reading of three winning stories from previous years and has since published an interview with one of the authors, Dawn Farnham (left), who flew over from Perth for the event. To read the interview in the library’s new magazine, Shelf Life Issue 1, Number 1 2017, go to Dawn Farnham Shelflife Nov 2017

All the winning stories since 2012 can be read on the Melbourne Athenaeum Library website.