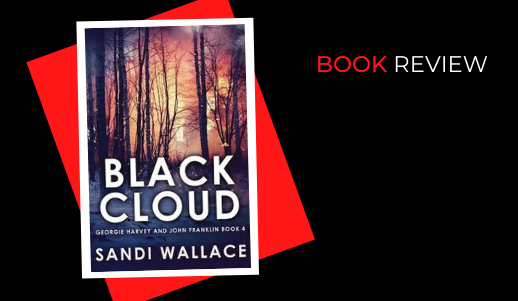 Black Cloud is Sandi’s latest rural thriller. Georgie Harvey and John Franklin are pushed to breaking point by a fatal explosion on a farm in Korweinguboora involving two of Franklin’s workmates. The crime scene is compromised by fire, blasts and water, and speculations run rife. Franklin seeks answers; someone to blame. Harvey investigates her toughest story yet. Will one break?

Black Cloud is the fourth book in a series by Australian author Sandi Wallace featuring her sometimes morally mismatched duo of Georgie Harvey and John Franklin.

Black Cloud opens with Harvey interviewing a lead: she’s the journalist to Franklin’s small-town cop. You might easily mistake this as the primary story, but it’s not. A parallel plot line throws up missed phone calls, odd interactions, and secrets that lead through the story and cause a sometimes halting distraction.

The main action occurs in a tiny Victorian postcode of Korweinguboora, which if looked at on a map you’d need to zoom in to find. The story rolls out at a speed of a runaway train. Set over 6 seemingly endless mid-winter days in which cold blankets the ground, the romantic relationship between the two protagonists seeps in causing communication issues and leaving them chasing truths that could have been exposed if they took a moment to chat.

Franklin’s refusal to communicate with Harvey is frustrating and at times made me want to cast the story aside. Wallace beautifully captures the fraught dynamic of flawed humanness and how real it is to shut out those we love when life gets too hard.

Although the story unfolds in what feels like real time, and the opening is a breakneck action fueled fiery explosion, Wallace manages to pump the brakes and slow the pace with enough drama to gently guide readers into the next station with a hope the next book in this series is awaiting.