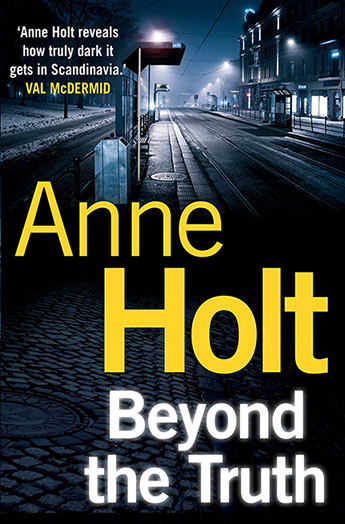 Shortly before Christmas, Hanne Wilhelmsen is called to investigate a mass killing. Four people are found shot dead at the luxury home of the wealthy Stahlberg family: shipping merchants and notorious for family disputes and lawsuits. Three of the dead are members of the family, and the fourth victim a seeming nobody. A bottle of champagne had been opened but not drank. What was the cause for celebration?

This is the seventh in the Hanne Wilhelmsen series—police procedurals set in Norway and written by the countries former minister of justice. I offered to review this because I have enjoyed the other four or five from the series I had read—and because I made the mistake of reading the eighth in the series first, and have ever since, been trying to find the book where things go pear shaped for the heroine to land her up in the circumstances she is in in 1222. I have finally succeeded! This is it.

The series is good solid Scandi Noir at its best, and though one of these or Jo Nesbo’s I read was set in the heat of a Scandinavian summer (well, the one week of it), this keeps true to form and we are freezing over Christmas, with plenty of ice and snow to let the chill of the plot really get to our core. Three member of a family and a visitor are brutally murdered, and as everyone wants to go off on holidays, there’s relief in some quarters that it looks like a straightforward family feud. We, of course, know better…

Investigating the family fills a lot of the pages, and family pathology being what it is (and Melbourne had its own society murders in 2003), there’s plenty to keep us interested. Even more so though, the development of Hanne’s character, her difficulties with her team and her back story—both in her family of origin and how she split from them as well as the new love of her life—keeps us engrossed. Like all good cop stories the heroine has issues—Hanne’s are long standing and pervasive. She is moody, resentful and does things her own way, yet Holt makes us root for her even as the train wreck looks inevitable—when it comes, its her own fault but never-the-less shocking and unexpected (even though, given 1222 I knew it had to be coming!).

There are twists, but mostly this is good dogged police work with great characters and location that takes you to a page turning climax (if you haven’t read 1222, buy this so you have it on hand—you’ll want to keep reading).

Though thrillers are my preference, Holt and Hanne have my vote for top police procedurals – 5 out of 5.