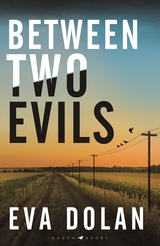 As the country bakes under the relentless summer sun, a young doctor is found brutally murdered at his home in a picturesque Cambridgeshire village.

Is his death connected to his private life – or his professional one?

Dr Joshua Ainsworth worked at an all-female detention centre, one still recovering from a major scandal a few years before. Was he the whistle-blower – or an instigator?

As Detective Sergeant Ferreira and Detective Inspector Zigic begin to painstakingly reconstruct Dr Ainsworth’s last days, they uncover yet more secrets and more suspects. But this isn’t the only case that’s demanding their attention – a violent criminal has been released on a technicality and the police force know he will strike again: the only question is who will be his first victim…

Eva Dolan’s novels have an established reputation for engaging with contemporary social concerns and networks of power. Between Two Evils, the fifth book in Dolan’s police procedural series, looks at Britain’s network of immigration removal centres. These prison-like facilities holding people who are to be deported from the UK for offences such as overstaying visas are run by commercial security companies and have been the subject of complaints, protests, and public inquiries.

Dolan focuses on a women-only centre in the fictitious Cambridgeshire village of Long Fleet. Looking into the murder of Josh Ainsworth, who until lately was a medico at the centre and lived nearby, Dolan’s detectives hear a family member’s opinion: “[Josh] didn’t agree with the place in the larger sense, its existence, you know? Our grandmother was from Ukraine and Josh was always very aware that she might have ended up in there if she was seeking asylum now. But he also knew someone needed to be in there looking after those poor women.”

But was Ainsworth a good guy? Someone has been leafleting the village, making assertions about sexual misbehaviour and collusion in abusive practices by staff at the centre. Perhaps Ainsworth was a predator or an enabler.

Investigations are hampered by the uncooperativeness of Securitect, which not only operates the Long Fleet centre but has contracts with the local council and Cambridgeshire Constabulary. Detective Inspector Dushan Zigic realises Securitect has brought muscle to bear on his policing superiors to curtail the investigation because it is generating negative publicity and threatening the company’s share price.

The novel’s second stream of action is melodramatic, pitched to screen treatment. A remorseless serial rapist, Lee Walton, has had his conviction overturned after a forensic expert’s credentials were exposed as fake. Detective Sergeant Melinda Ferreira, who has stayed in touch with Walton’s ex and child, becomes the victim of stalking and attacks as Walton strives to discover their whereabouts. Across the eight days of the story, police struggle to get Walton back into custody while their prey’s viciousness escalates, carrying the plot to a bloody climax.

As Ferreira muses, murder investigations create all kinds of emotional collateral damage.  Dolan’s characters, civilian and police, are individualised and given space to show some complexity in their reactions to what is happening in their work and home lives.

Between Two Evils is a long book and not a quick read. The quality of its prose rewards the dedicated reader, however. Each sentence, each detail contributes something, and there are moments worth savouring. Here is Ainsworth’s residence as first spotted by Zigic: “It was the middle house in a row of Victorian workers’ cottages, built low and listing away from the road, the ground around them eroded by the vicious winds that blew across the fens, leaving the houses standing like teeth in receding gums.”

Separated into seven sections, reflecting the week during which this story takes place, I found myself taking a lot longer than that to get through Between Two Evils. I’m not sure what this means but Dolan’s previous standalone book, This Is How It Ends, was one of my books of the year when I read it and I did so at speed. This new one, part of her DI Zigic and DS Ferreira series, is a different beast; perhaps I was (unfairly to the author) unprepared for a police procedural so it took me a while to get into the flow.

All that aside, Dolan is a masterful writer with an unremitting interest in the marginalised in society, the forgotten people and those who fight to shine a light on their lives and protect them.  In Between Two Evils we are taken behind the scenes of England’s detention centre system and the women held there. We also encounter the protest groups that hover around the edges, trying to remind people of the injustices at play.

It’s grim stuff but also fascinating. As with This Is How It Ends you have to wonder at the degree of research Dolan must put in, or if she actually knows people involved in these worlds. This is a long book, maybe a bit too long, but a portion of that comes from the level of characterisation Dolan gives her players, the two ‘star’ detectives of her series in particular of course. If you like to know a lot of the backstory or emotional world of your sleuths then you will love this.  DI Zigic and DS Ferreira are very distinct and believable characters. Astute, courageous and committed to their work, they’re also impacted by their own personal stories and experiences, the day-to-day pressures of their lives on their work.

The second-tier storyline in this book, about a sexually violent criminal released on a technicality, was particularly compelling as it explored internal police politics (professional and personal) as well as the frustration and pain police experience when they see victims returning to their abusers or the legal system undoing their own good work.

Despite being focused on quite ugly truths about life, Dolan’s understanding of human emotions and her empathetic streak delivers many poignant and beautiful moments amidst stretches of unashamedly mundane police work, complicated plot twists and good old-fashioned action. When describing what it’s like for police to deliver the ultimate bad news to family members she says people always know what’s coming. They can see it in the weight carried around the detectives’ shoulders … “a burden they knew they would soon take from you … but the part that was left couldn’t be passed on to anyone else. That you kept forever.”

A wave of wonderful suspense builds in this book and when the action really steps up and breaks in the case emerge it is brilliant but it takes about 350 pages to get there. At the time, I felt very aware of that. Hell’s bells though, the last section of the book is incredible. The pace is frantic and the detail (spoilerish, sorry) is gruesomely entertaining. To think that Dolan can so expertly turn her hand to everything from social investigation to crime procedural to sensitive insight to action-movie brilliance all in one book continues to make her a writer with interest.