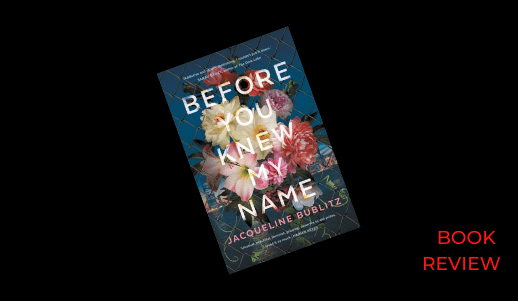 Before You Knew My Name is a feminist novel filled with moments every women will recognise and at times dread. But is also a novel of optimism and tenderness – exquisitely crafted and my top read of the year.

‘They come for us all over the world.

‘Sometimes, if enough time has passed between one girl and the next, a city will be shocked awake when it happens. People will take to the streets with their signs and their anger, a crowd surge of protest and grief as they send a message across the town: We don’t want to be unsafe here.’

Ruby is haunted by the murder and becomes obsessed to learn the identity of this young, murdered woman. She seeks some sort of understanding in the Death Club, a group of odd characters, each of whom has been touched by death and who meet to discuss death and dying.

‘The question feels as large as the room, and all three women pause to consider it. Thinking about the nights they’ve crossed the road to avoid a parked car with its lights on or pretended to make a phone call when someone walks too close behind them. Remembering the times they have shifted seats on public transport, or said no, thank you, to that offer of a drink. Self-preservation as a replacement for instinct, because being right would be a real danger here.’

Before You Knew My Name is an astonishing, debut novel taking an interesting slant for a crime novel. The quality of the writing is outstanding, and the book will certainly win, and rightly deserves to win, awards. Jacqueline Bublitz does not preach but rather handles the topic of violence towards women with a deft hand and certainly doesn’t posit that all men are violent. Bublitz’s portrayal of the relationship between Alice and her landlord Noah is both touching and hopeful.

The story is narrated by Alice who is caught between life and death. She gradually tells her story, silently communicating with Ruby through a whisper of wind or a sudden feeling that raises the hairs on Ruby’s arms. Eventually Alice gently guides Ruby to discover Alice’s murderer (chilling) and consequently Alice’s story.

Before You Knew My Name is a feminist novel filled with moments every women will recognise and at times dread. But is also a novel of optimism and tenderness – exquisitely crafted and my top read of the year.

This is not just another novel about a dead girl.

When she arrived in New York on her 18th birthday carrying nothing but $600 cash and a stolen camera, Alice Lee was looking for a fresh start. Now, just one month later, she is the city’s latest Jane Doe, an unidentified murder victim.

Ruby Jones is also trying to start over; she travelled halfway around the world only to find herself lonelier than ever. Until she finds Alice’s body by the Hudson River.

From this first, devastating encounter, the two women form an unbreakable bond. Alice is sure that Ruby is the key to solving the mystery of her life – and death. And Ruby – struggling to forget what she saw that morning – finds herself unable to let Alice go. Not until she is given the ending she deserves.

Before You Knew My Name doesn’t ask whodunnit. Instead, this powerful, hopeful novel asks: Who was she? And what did she leave behind? The answers might surprise you.