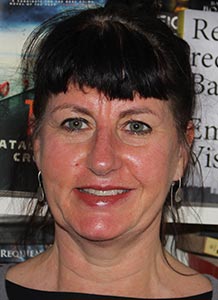 A bit of recent news: President Lindy Cameron has just announced her engagement to her partner of 22 years, Chele Cooper (a former convenor who now administers the Scarlet Stiletto Awards). Sisters in Crime extends them both our congratulations and warmest wishes.

Before I say anything else, I just wanted to let you know the news that just came in – that Jane Harper has won the Crime Writers Association of Britain’s Gold Dagger Award for The Dry. No wonder Jane was unable to speak tonight at our Sensational Seconds event. Let’s give her a cheer she’ll hear in Old Blighty!!

Back to Sandra. Sandra let us know last year that this would be her last year as a convenor as she’s pretty well tied up full-time with various committees despite being officially retired. Sandra generously stepped into the breach when President Vivienne Colmer died in January, which was a cause for great sadness.

One of Vivienne’s most significant roles during her short tenure was to officially open Sisters in Crime’s 25th anniversary convention – SheKilda3: One Day Crime Spree. She was very ill – she had to rest up in the afternoon to make it to the Scarlet Stiletto Awards – but she was so wise and so welcoming. None of us really appreciated how frail she really was.

SheKilda3 was a critical and financial success but we could have done with more bums on seats. If there were particular reasons that prevented you from going, please let us know. Some foolhardy convenors want to do it again so we need to know.

Our author members, of whom there now a lot, had a particularly good time. They got to meet fans, got to talk about their work and the big issues about crime writing, and got to pitch to publishers and producers. Most importantly, they also got to meet each other and network.

This is one of the best achievements of Sisters in Crime in my view – the support that authors give each other. They read other’s read manuscripts, launch each other’s books, suggest each other for literary panels, blog for each other and cheer each other on. I don’t think the same camaraderie applies to male crime writers and certainly not to the world of big ‘l’ literature.

One of the personal highlights for me this year was seeing ‘Our Nicole’ on stage accepting an Emmy for Big Little Lies and paying tribute to Liane Moriarty who won Sisters in Crime’s Davitt (Best Adult Novel) for the book in 2015 and last year presented the Davitts.

The good news Reese Witherspoon, who produced and starred in Big Little Lies, and her Australian co-producer, Bruna Papandrea, are definitely making a film of Jane Harper’s, The Dry. Sue Maslin, who produced The Dressmaker, is producing Ann Turner’s debut crime novel, The Lost Swimmer. Ann has just finished the script. As you heard earlier, Only Daughter, Anna Snoekstra’s debut novel, has been optioned in the US by Universal Pictures.

This is a feather in our collective cap – crime stories by women, produced by women, and made for women (though, of course, this is not to exclude men!). There is such a thirst for these stories. Every Cloud Productions, a great supporter of the Scarlet Stiletto Awards, turned to Kickstarter to raising the remaining funds it needed to make Miss Fisher’s Murder Mysteries the Movie. Every Cloud aimed for $250,000 but raised three quarters of a million dollars, a large segment of that flooding in from the US.

This year has seen another series of wonderful events like tonight’s. Partnerships, such as the one with the Sir Zelman Cowen Centre at VU, have continued. We’re also proud to announce a new partnership. When the Davitts couldn’t get sponsorship, Robyn Byrne, our outgoing treasurer, had the bright idea of appealing for funds via the Australian Cultural Fund. That exceeded our goal of $5000 and resulted in a fabulous new partner, Swinburne University of Technology, which has agreed to support next year’s Davitts and provide some sponsorships for the Scarlet Stiletto Awards next month.

Swinburne is also providing a brilliant new venue. We’ve revamped the ceremony and it will be champagne and canapes event – and an ideal opportunity to get frocked up. Sigrid Thornton will be doing the honours aided and abetted by Jane Clifton. Please grab a bunch of invites as you leave and hand them around. We also collaborating with the awesome Carolyn Beasley on podcasts, videos and much much more,

Thanks largely to Robyn, Ann Byrne and Janice Simpson, who are all retiring tonight, Sisters in Crime has continued to its “modernisation program”. (I know that sounds like the Chinese Communist Party!)

We revamped our budget and held our first Strategy Day and, amongst other things, we’re looking at succession planning. We’re particularly keen to get some younger women involved. We’re planning to get some advice from the Victorian Women’s Trust but we would appreciate your input and appreciate you trying to bringing along some younger crime fans.

Sisters in Crime is now on a sounder financial footing and our governance procedures have improved. We make a big effort to update the website and our Facebook pages regularly, if not daily, so we hope you’re visiting both. We’ll be doing some changes to the website soon and, again, if you have any ideas, do let us know.

I’d also thank the other convenors:

The WA Chapter continues to meet as a book discussion group. The Queensland chapter is still active but I regret to report that the NSW Chapter has still not gotten off the ground.

Finally, many thanks are also due to:

And most especially thanks to all of you, our members, for sticking with us. Thank you for coming. I trust you’re still having fun which is our main reason for existence. Thank you.