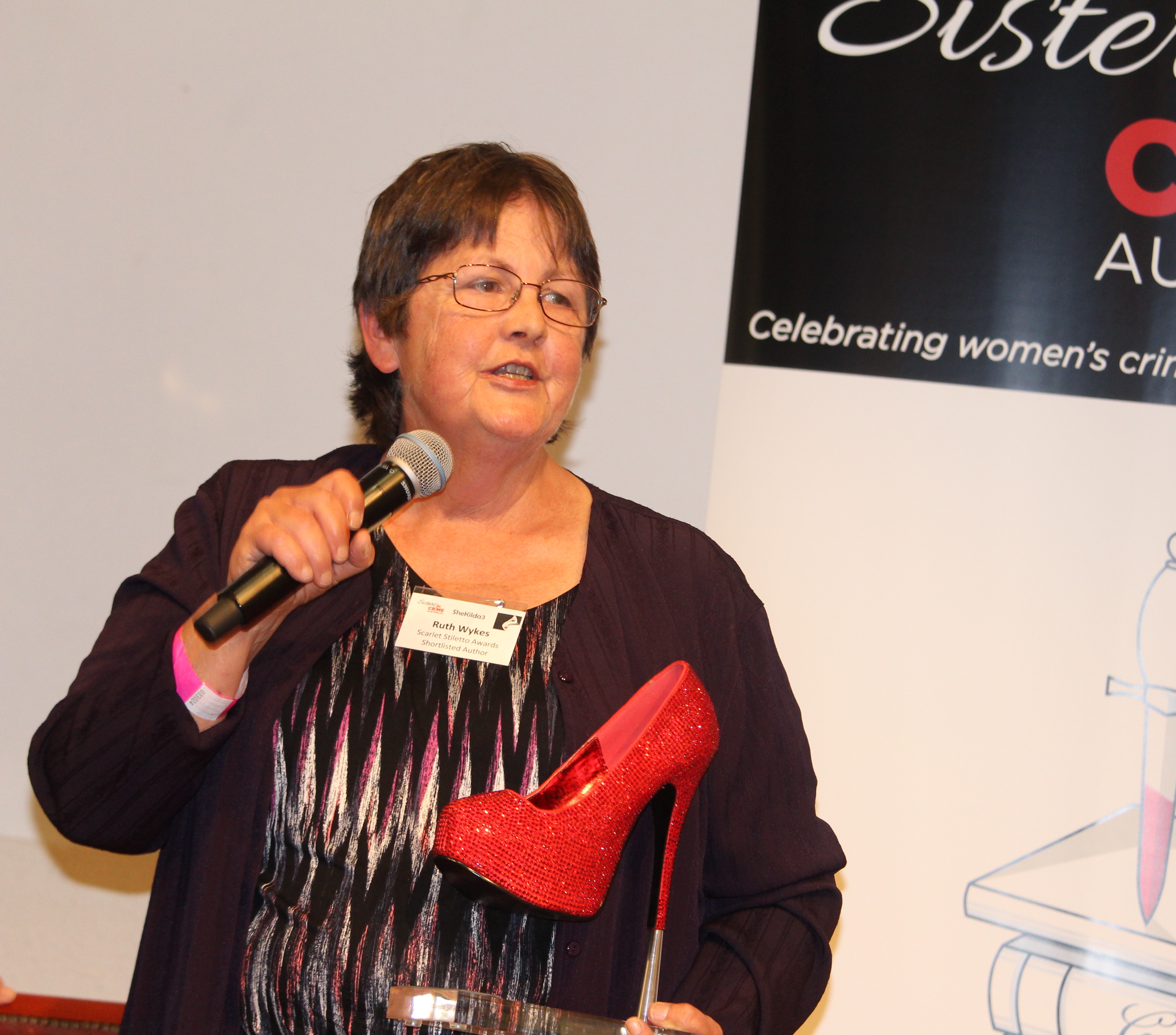 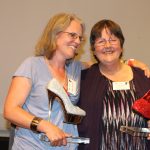 To mark the silver anniversary, a special silver stiletto trophy was presented – the winner, Jacqui Horwood (left), a librarian from Seddon in Melbourne’s western suburbs. Only previous shoe (first prize) winners were eligible to enter.

Wykes is co-author of two true crime collections: Women Who Kill (Five Mile Press), which she wrote with Lindy Cameron in 2010, and Invisible Women: powerful and disturbing stories of murdered sex workers (Echo Publishing) which she and Kylie Fox released earlier this year.

Wykes, who edited the lesbian magazine, WOW (Women Out West), in Perth before moving east, was awarded The Text Publishing First Prize ($1500) for “Stone Cold” about a small town torn apart when a seven-year-old boy goes missing. Wykes also won the coveted stiletto trophy, a scarlet stiletto shoe with a steel stiletto heel plunging into a mount and the Scriptworks Great Film Idea Award ($200) for the same story.

Wykes, who works at Bunnings to make ends meet, was initially speechless. “I was surprised and thrilled beyond words to win the Scarlet Stiletto Award. Australia has some of the best female storytellers in the world, and to even be a part of that is an honour. The characters in my story, ‘Stone Cold’, haunted me long after the story was written, so I have started to write a novel about them. I am in awe of Sisters in Crime who encourage authors like me to constantly strive to be better storytellers.”

Horwood, a former Sisters in Crime convenor and current Davitt Award judges’ wrangler, won the Silver Stiletto ($1000) for “Diving for Pearls”, a story about a one-night stand gone wrong. Her crime stories have appeared in e-zines and anthologies. Horwood won the Scarlet Stiletto Trophy in 2003.

Horwood said, “I was shocked but thrilled to win the Silver Stiletto, particularly considering the talented writers who also submitted stories. I’ll be keeping the shoe close by to inspire me to keep going with the Young Adult crime novel I am currently working on.” 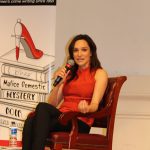 Nicole da Silva, star of Wentworth, presented the awards. Prior to the award presentations, Silva discussed her ‘life in crime’ (and much more) with Professor Sue Turnbull who, earlier in the day, was awarded a Life Membership and been anointed as Sisters in Crime’s first ambassador.

This year 158 stories competed for the Scarlet Stiletto Awards for a record $10,000 in prize money plus the scarlet and silver trophies. Twenty-three authors were shortlisted for a total of 15 awards. Sixteen shortlisted authors attended the awards ceremony.

Editor Liz Filleul (Mt Dandenong, Vic) won both the Simon & Schuster Second Prize ($1000) and the inaugural Every Cloud Productions Mystery with History Award ($750) for “Foul Play”, a story about Australia’s first ever women’s football match, held in Perth in 1917 to raise money for the ANZAC’s comfort funds.

The Sun Bookshop Third Prize ($500) went to Jenny Blackford (Wallsend, NSW) for “Cooking up a Murder”, set in Ancient Greece, which also took out the Kerry Greenwood Malice Domestic Award ($750). Blackford has also published an historical novella set in Athens and Delphi, The Priestess and the Slave (Hadley Rille Books, 2009)

The Athenaeum Library’s Body in the Library Prize ($1000) was won by Catherine Moffatt (Lake Munmorah, NSW) for “The Team from Information Services”. Moffatt has won a number of literary awards, including the inaugural Brotherhood of St Laurence Hope prize, just recently.

She says: “I had a wonderful time at SheKilda3. I learned a lot of valuable lessons about both the craft and the industry that I’m sure I will refer back to for many years to come. Sisters in Crime has been incredibly supportive of me, not only encouraging me to write, but inspiring me to believe that my work will keep improving and eventually be able to contribute to our library shelves. I will put the prize money I have generously been given towards studying creative writing at university and broadening my collection of books.”

Youth award runner-up was Jenny Chen (Templestowe, Vic) for “Child’s Play”. Chen’s story was inspired by author Cate Kennedy (winner of the first two Scarlet Stiletto awards) after she gave a lecture at her school, Melbourne Girls Grammar, about her collection Dark Roots.

An academic librarian from Perth Katie Mills (Doubleview, WA) won the Financial Crime Award ($500) for “A Good Night’s Sleep”. Her short stories were also awarded prizes at the 2014 and 2015 Scarlet Stiletto Awards

Sandi Wallace (Mt Dandenong, Vic) took out the Harper Collins Romantic Suspense Award ($500) for “Busted”. Wallace’s debut rural crime thriller Tell Me Why won the 2015 Davitt Award Readers’ Choice. The sequel, Dead Again, will be out in April next year.

The Clan Destine Press Award for Cross Genre ($400) was won by zoo-keeper turned writer, Leisl Egan (West Heidelberg, Vic) for “He was Hers” about an old woman on a self-imposed exile who is confronted by the results of her creation that destroyed humankind.

The judges decided not to award the Liz Navratil Award for Best Story with a Disabled Protagonist ($400) this year. 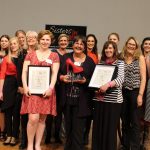 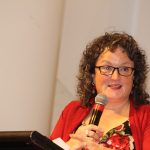 At the end of the ceremony, Carmel Shute, co-founder of Sisters in Crime, was presented with a ‘Doing Time’ Silver Stiletto trophy. For once in her life, she was left speechless. 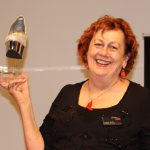