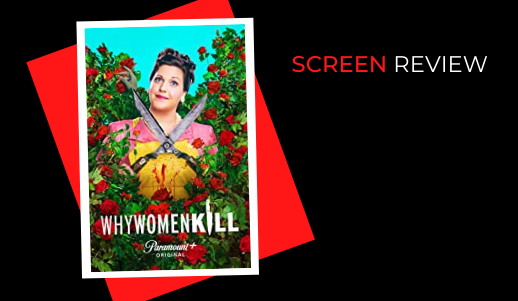 I counted down the days waiting for Season Two of Why Women Kill. I was disappointed, maybe expecting too much. It is a very entertaining story of why a woman would kill, but not why women kill. Season Two retains the high style and witty script. It is very watchable, but it lacks the edge and authenticity of Season One.

Season One has links from powerlessness to taking control by killing: the 1960s’ housewife, euthanasia during the AIDS epidemic of the ‘80s, and domestic violence in 2019 (although it is stretch at the end). Season Two lacks that conviction, Alma’s way of achieving her ambition is a personality flaw rather than a last resort.

As such, Alexa Junge was a perfect choice of scriptwriter, she was a writer on The United States of Tara. The dialogue is delicious, particularly Alma’s sweet-faced self-absorption as she twists people’s objections to perfectly reasonable self-justification.

The reason for the different focus is not due to a change in the gender balance with the scriptwriters from Season One to Season Two. Like Season One, three of the episodes of Season Two were written by women: Mary Elizabeth Hamilton, Hannah Schneider (both an episode each in both seasons) and Alexa Junge (Season Two). Stacey Harmen was the third female scriptwriter in Season One.

Season Two is set firmly in 1949 Los Angeles. Although the set design and clothes are impeccable, the feel of the time misses the political and social authenticity of Season One. The lack of acknowledgement of race grated in the post-war setting. I’m not a historian of Los Angeles’s racial relations but I can’t image a socially ambitious woman accepting a black son-in-law without comment about his colour. Also, during World War II black and white men did not fight side by side, they were in separate units until 1948.

Overall, suspend disbelief and watch it. Fun story, well told. The clothes are to die for and flattering on the larger figure – a big plus.

Streaming on SBS on Demand.