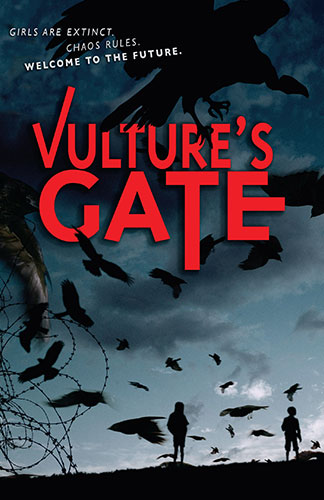 Author: Kirsty Murray
Publisher: Allen and Unwin
Copyright Year: 2009
ISBN: 9781741757101
No of Pages: 252
Review By: Sarah Robinson
Book Synopsis:
It is 40 years into the future and the world is in turmoil. A plague has destroyed humans’ ability to conceive females, or so Callum thinks until he meets Bo.
One girl – could she be the last girl alive? One boy, pursued by reckless men who have kidnapped him from his fathers.

Bo and Callum go in search of a safe haven, a place to call home. But where can they turn and who can they trust? When every stranger is a threat, does their only hope lie in reaching Vulture’s Gate?

Following a journey that takes them across barren deserts and lost valleys, Bo and Callum must discover how to survive alongside runaway boys and crazed religious terrorists, in a world with an uncertain future.

And what is the disturbing secret at the ruined city’s core?

Vulture’s Gate is the dystopian book by Kirsty Murray.

In the dystopian future where girls are extinct and the world is in havoc, nowhere is safe. When Bo, possibly the last surviving girl on the planet, rescues Callum from death in the desert, she is forced to leave her underground home and venture out into the formidable world outside. Bo agrees to help Callum find his fathers and they both venture across the chaotic and dangerous land. They must escape outstationers, fight off street gangs and terrorists, but nothing can compare to the treacherous world that awaits them in Vulture’s Gate.

I didn’t really like reading this book. Firstly, there was hardly any world building. I had no idea what the world around the characters looked like. I didn’t know how the world became like this or why. The whole time I was begging for more information and I never got it. I had so many questions that I wanted answered and I hardly got any answered. I wanted to know more about the technology they used and how it worked. I wanted to know more about everything. There really wasn’t much explanation behind everything. I wanted more depth and I wasn’t given it. That made the entire book uninteresting and I didn’t understand why some things happened because I was given no insight to the world around the characters.

The characters confused me. The main characters, Bo and Callum, how old were they supposed to be? Ten? Eleven? Most of the time, these kids communicated in a way that most ten year-olds wouldn’t. They would say words like ‘chimera’ and ‘queer’. Even I didn’t know what ‘chimera’ meant until I looked it up. And do you hear many ten year-olds saying ‘queer’? The way they spoke didn’t seem realistic for how old they were supposed to be. Bo and Callum are likeable enough, except I couldn’t really connect with them.

I felt like the ending to this book was really rushed. I don’t know whether there’s a second book, but everything seemed to end quickly and I hardly realised it was the end until I turned the last page. I just sat, thinking: Wait, what? What just happened? Is that the end? Really? I liked the start of the book and it intrigued me, but I didn’t enjoy reading the remainder of the novel. I quickly lost interest and I found myself getting bored in the middle of a chapter. Even though robo raptors, feral men, a plague and a bomb surrounded the characters, the story just didn’t excite me the way I had hoped.

From reading the blurb, the plot seemed really interesting. Perhaps this just wasn’t my kind of book. I’d give Vulture’s Gate by Kirsty Murray a score of 3 out of 10. I’m sure a lot of people like this book, but it just wasn’t for me.

Thank you to Sarah Robinson who first published this review on her blog Written Word Worlds.
http://writtenwordworlds.wordpress.com/