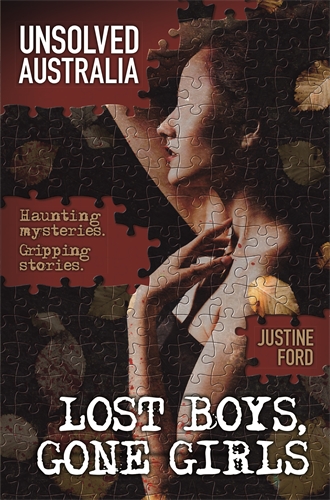 Can you catch a killer or find a missing person?

Australia is ‘the lucky country’. But not for everyone. Unsolved Australia: Lost Boys, Gone Girls tells thirteen stories of people whose luck ran out in the most mysterious of circumstances.

It’s a journalistic deep-dive into Australia’s dark heart by one of Australia’s premier true crime writers, Justine Ford, the acclaimed bestselling author of Unsolved Australia and The Good Cop.

Why are four people missing from a Western Australian doomsday cult? Who abducted and murdered beauty queen Bronwynne Richardson on pageant night? And why is a cooked chook important evidence in the outback disappearance of Paddy Moriarty?

Key players are interviewed, evidence laid out and suspects assessed. Never-before-published information is revealed. Can you help crack the case and solve these mysteries?

Hold tight as Unsolved Australia: Lost Boys, Gone Girls takes you on a chilling yet inspiring true crime rollercoaster ride where the final destination is hope.

In July 2002 Lorraine Carter, a petite and vulnerable 43-year-old with physical and intellectual challenges, went missing from her home in Victoria’s Mitta Valley. She has not been seen since. A coroner found in 2004 that Lorraine is dead and that her husband Murray was implicated in her death – but her body has never been discovered. Her devastated parents still hope that one day someone will find Lorraine’s remains, or reveal something they may have been told about her fate so she can be brought home for burial.

Lorraine’s story is just one of thirteen troubling cases which Justine Ford looks at in Unsolved Australia: Lost Boys, Gone Girls. Ford is a journalist, author and former presenter on the TV series Australia’s Most Wanted, and this book is her fifth offering in the true crime genre.

Taking an approach which will be familiar to fans of her earlier works (the most recent in a similar vein was Unsolved Australia, Macmillan, 2015), she invites readers to play ‘armchair detective’, come forward with information that could help police to solve the cases – and possibly earn a reward of up to $1 million in the process.

Her book has something for almost every devotee of the genre. In addition to the individual cases, it includes profiles of notable figures in criminal investigation, including former Detective Narelle Fraser, who worked on the Lorraine Carter case, and forensic anthropologist/criminologist Dr Xanthe Mallett, who is well-known for her appearances on true-crime shows on TV.

The book covers a wide spectrum of material: there are crimes, potential crimes, and mysteries where possibly no crime has occurred. As well as murders, Ford looks at missing-persons cases and the discovery of unidentified skeletonised remains in a Melbourne dockyard in 1990. Some cases are recent (the disappearance of 35-year-old computer programmer Attila Bogar, missing from his home in Melbourne since October 2014); others are decades-old (the case of teenagers Maureen Braddy and Allan Whyte, who vanished in Bendigo in 1968).  A couple have recently featured on TV: Paddy Moriarty, missing from the tiny town of Larrimah since 2017, and 17-year-old Bronwynne Richardson, abducted and murdered in Albury in 1973. Others are all but forgotten except by victims’ loved ones and the detectives still investigating.

What nearly all the stories have in common is the need of grieving family and friends for answers. Ford’s aim of sparking public interest to provide these answers is a worthy one, and – because cases can be solved with information from people who didn’t even realise they knew something relevant – some of the target audience will see reading this book almost as a community service. Others will simply enjoy the variety in the cases Ford covers.

That said, Lost Boys, Gone Girls is perhaps not quite so engrossing a read as its companion volume. Shaking free that crucial, mystery-busting nugget of information surely depends on reaching the widest possible audience – and holding its attention.

Unsolved Australia seems to have succeeded in this: in introducing Lost Boys, Gone Girls, Ford notes that one extract from the earlier book generated two thousand clicks a minute when it went online. But there, Ford was assisted by the subject matter which included, for example, previously-unpublished details on the unspeakable Derek Percy, a grub with a predilection for defecating and urinating on women’s underwear. Percy was found culpable in one child murder, the 1969 abduction and killing of 12-year-old Yvonne Tuohy, but by the time of his death he was a suspect in nine unsolved crimes, including the Wanda Beach murders in Sydney (1965) and the disappearance of the Beaumont children in Adelaide (1966).

Not every case is such obvious click-bait, however, and in this book, while the goal may always be laudable, Ford’s success in generating compelling narratives varies. One of her strengths is helping readers to engage with victims as real people, which she achieves by inviting us to step inside their lives. Taking the time to do this mostly works, but occasionally it leads to some curious narrative choices: Ford does not always answer up-front the basic journalistic questions of “who, what, when and where.” In a book which traverses such a range of times and places this can be disorienting and – to this reader at least – irritating. In the chapter dealing with the disappearance of army lieutenant Sean Sargent, for example, we are nine pages in before we are told that this occurred in 1999. The intervening material, covering Sean’s family history over decades, struggled to hold my interest.

But this is a minor flaw and not every reader will be disconcerted by it. Let’s all hope, for the sake of the families left behind to grieve and wonder, that each of these thirteen tragic stories circulates widely – and manages to jog the memory or conscience of someone, somewhere.

Read Ford’s book. You may turn out to be one of those with a key piece of a puzzle.