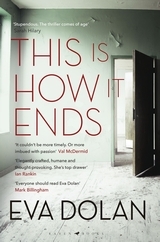 This is how it begins. With a near-empty building, the inhabitants forced out of their homes by property developers. With two women: idealistic, impassioned blogger Ella and seasoned campaigner, Molly. With a body hidden in a lift shaft. But how will it end?

This publisher’s introductory spiel for This is How it Ends is austere yet compelling, a good indication of the book to come. I hadn’t realised how much buzz surrounded this book – the Amazon page touts it as “The most critically acclaimed crime thriller of 2018” and Ian Rankin provides a cover blurb. To be honest, in my early reading, I wondered what the fuss was about. Eventually I realised.

Some people might be turned off by the setting for this book. The world of high-rise property development and the displacement of city residents from traditional neighbourhoods threatens to be dull and bleak. It is on the surface, but it’s also very topical and relevant to our times. By setting a thriller amongst a group of people trying to hang on to their homes while bulldozers and cranes blunder closer and closer, you get the fuel that novels like this rely on: tension.

Initially the core of the story revolves around Ella, a young activist attracting media attention by standing up for the residents of a soon-to-be-demolished block of flats. She is mentored somewhat by lifelong political campaigner, Molly, whose activism credentials stretch back to the 1980s Greenham Common peace camp era. Molly’s dogged commitment to political causes has left her pretty impoverished financially; the derelict building is not just a cause for her, it’s also her home. Both women are known to the police for very separate, very different brushes with violence in their past. Their relationship gets much closer when Ella accidentally kills a man who has assaulted her and Molly steps in to help dispose of his body in the building’s lift shaft.

There is a lot to like about this book. It represents the best of crime fiction in that it is so much more than that single moniker can encapsulate. Dolan gives us social investigation and commentary. She takes us deep into a very specific and (for most of us) little-known world and she delves into moral questions. Amidst all of this, however, she also weaves a highly complicated, nail-biting plot that has the reader questioning who are the innocent and who are the guilty along the way.

Chapters shift from being titled Ella or Molly. Ella is in the third person, Molly in the first. Dolan drops in some hard facts of modern life, such as media outlets accepting bland truths because “most didn’t have time to go into full investigative mode”. She makes wonderful and evocative word choices. For instance, Molly talks about the day when the crumbling apartment block finally falls apart – “the world’s grimmest doll’s house. Most rooms abandoned and sad and the little figures inside so forlorn.” In other instance Molly reacts to a betrayal in her life, observing how she feels like “everything has been scooped out of me, my body scraped from skull to womb”. How great is that? The language, not the sensation of course.

This book will play with your emotions. Poor Ella seems so idealistic and committed. World-weary Molly is brash and mouthy. By the final section, titled ‘This is how it ends’, you’re not so sure. Subtle shifts in the plot have huge emotional consequences. It’s the way people react to certain events rather than the events themselves that really ratchet up the storyline, building the tension. It’s difficult to give examples without simultaneously giving spoilers.

This is the kind of book that has you flicking back to previous pages to re-read sections in case you missed a clue. I mean this in a good way. As revelations emerge, especially in the last 50 pages, you just start questioning how much attention you were paying earlier on. Like some of the characters in the story, you can’t believe you got things so wrong. It’s uniquely engrossing.

Eventually I began to see why Molly was written in the first person. She has something to say in the end that requires the absolute power of that device.

This is How it Ends is based in a very specific world but one I sincerely hope does not put readers off. It is such a great psychological and suspenseful read, crammed with penetrating observations on all manner of topics and populated by fascinating characters, described in distinctive prose. I’d read more Eva Dolan in a flash.