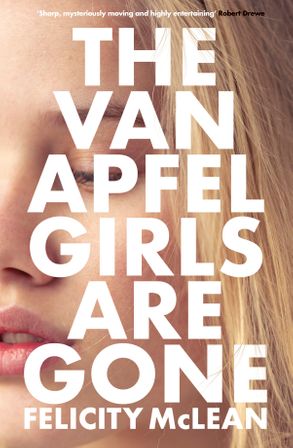 Part mystery, part coming of age story, The Van Apfel Girls are Gone is set in a distant suburb on the encroaching bushland, over the long hot summer of 1992. It’s the summer of the school’s Showstopper concert. The summer Tikka never forgot. The summer the Van Apfel sisters disappeared. Blackly comic, sharply observed and wonderfully endearing.

‘We lost all three girls that summer. Let them slip away like the words of some half-remembered song and when one came back, she wasn’t the one we were trying to recall to begin with.’

Tikka Molloy was eleven and one-sixth years old during the long hot summer of 1992 – the summer the Van Apfel sisters disappeared. Hannah, beautiful Cordelia and Ruth vanished during the night of the school’s Showstopper concert at the amphitheatre by the river, surrounded by encroaching bushland.

Now, years later, Tikka has returned home to try and make sense of the summer that shaped her, and the girls that she never forgot.

Blackly comic, sharply observed and wonderfully endearing, this is Picnic at Hanging Rock for a new generation, a haunting coming-of-age story with a shimmering, unexplained mystery at its heart.

An intriguing title: who are the Van Apfel girls and where have they gone?

Written in the first person by Tikka Molloy, we move between the present day and 1992, when the Van Apfel girls, Hannah (aged 14), Cordelia (13) and Ruth (7), went missing. Tikka, precocious and smart, was eleven and one-sixth in 1992. Her older sister Laura was 14. The Molloys and the Van Apfels were best friends, enjoying a carefree life in a small country town, situated on a river, where they swam, played and chatted. The Van Apfel parents belonged to a church which followed strict, somewhat outdated and baffling religious principles. If rules were broken – or even appeared to be broken – harsh punishment followed, sometimes witnessed, to their horror, by the Molloy girls.

Today, Tikka lives and works in Baltimore, USA, but she has never been able to forget the impact the disappearance had, not just on her life, but on the small Australian country town in which she grew up. As with many who suffer a loss, she ‘sees’ Cordelia (Cordi to her friends), the beautiful, charismatic, mad-cap, middle sister; her father’s favourite; popular with everyone. Once up close, of course, she inevitably discovers only a Cordelia look-alike.

“We lost all three girls that summer. Let them slip away like the words of some half-remembered song, and when one came back, she wasn’t the one we were trying to recall to begin with.”

So Tikka muses when she returns to her home town to be with her sister who has been diagnosed with cancer.  And as she looks back on her life before and after the disappearance, we see events through the eyes of the 11-year-old. We join her in the preset day, as she takes the opportunity to chat with people who were adults at the time, learning a little more here and there; re-interpreting some events of which she had been sure.

This is a coming-of-age story; a story of the impact such events have on those left behind.

Is it a crime story? Possibly.

Is it a mystery? Definitely.

It may be all of those but, most of all, it is a well-written, intriguing novel.  Read it and enjoy!