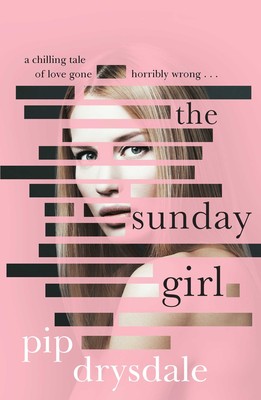 Some love affairs change you forever. Someone comes into your orbit and swivels you on your axis, like the wind working on a rooftop weather vane. And when they leave, as the wind always does, you are different; you have a new direction. And it’s not always north.’

Any woman who’s ever been involved with a bad, bad man and been dumped will understand what it feels like to be broken, broken-hearted and bent on revenge.

Taylor Bishop is hurt, angry and wants to destroy Angus Hollingsworth in the way he destroyed her: ‘Insidiously. Irreparably. Like a puzzle he’d slowly dissembled … stolen a couple of pieces from, and then discarded, knowing that nobody would ever be able to put it back together ever again.’

So Taylor consults The Art of War and makes a plan. Then she takes the next irrevocable step – one that will change her life forever.

Things start to spiral out of her control – and The Sunday Girl becomes impossible to put down.

Taylor Bishop works in London as a real estate researcher. She has just found out that her ex-boyfriend, Angus, has taken an unforgiveable step in their breakup that requires – indeed needs – revenge. Taylor consults The Art of War and makes a plan which very quickly goes horribly wrong. As in most cases of domestic violence it is never as simple as just leaving.

At first I thought I was the wrong person to review this book – a somewhat jaded 68 year old feminist who is twice divorced and once worked as a crisis counsellor in domestic violence. It seemed too peppy for my taste. The heavy use of simile and metaphor in the early pages is laid on thickly so that Taylor wants the ‘strongest gust of wind’ – which started as a small ‘snowball’– to be turned to ‘ashes’. She is a ‘rubber band’ that snaps and comes out from behind her ‘veil of saccharine’. By page 8 her life is like a Rubik’s cube and the ‘silence put its pretty hands around my throat’. Page 3 introduces Ms Drysdale’s most successful metaphor – dominos. The author sticks with this and repeats it throughout the novel which makes sense as the inevitable falling of dominos after the first push is an apt description of the plot and the feeling of Taylor’s life being out of control.

BUT I’m pleased I read on. As the metaphors narrow down to dominoes falling and juggling for position and the others disappear the writing becomes tighter and the pace rollicks along. The prefiguring, and purposely confusing, “How did I get to this” is well played and leads to a satisfactory and surprising ending.

The depiction of the confusion of the survivor and the impatience of those surrounding her is well portrayed in thought, deed and character. The perpetrator is sinister and threatening and his nature is initially disguised from Taylor and more fully from the world at large. Because the characters slowly unfold and the tension increases I feel it matches the real life evolution of domestic violence and the arc of vindictiveness and need to control of perpetrators.

The use of quotes from Sun Tzu’s The Art of War at the beginning of each chapter is evocative. Especially as sometimes it isn’t clear who is predator and who prey or to whom the quote refers.

I enjoyed the book immensely and would recommend it to readers who like a light touch, tension, humour and the triumph of good over evil.