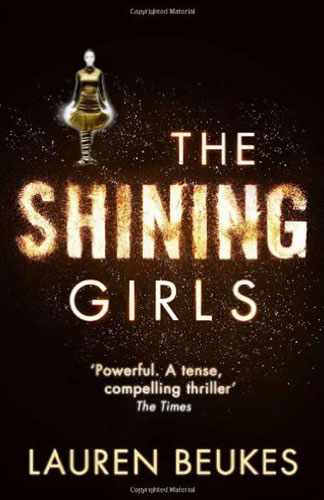 Author: Lauren Beukes
Publisher: Harper Collins
Copyright Year: 2013
Review By: Sue Turnbull
Book Synopsis:
The future is not as loud as war, but it is relentless. It has a terrible fury all its own.”

Harper Curtis is a killer who stepped out of the past. Kirby Mazrachi is the girl who was never meant to have a future.

Kirby is the last shining girl, one of the bright young women, burning with potential, whose lives Harper is destined to snuff out after he stumbles on a House in Depression-era Chicago that opens on to other times.

At the urging of the House, Harper inserts himself into the lives of the shining girls, waiting for the perfect moment to strike. He’s the ultimate hunter, vanishing into another time after each murder, untraceable-until one of his victims survives.

Determined to bring her would-be killer to justice, Kirby joins the Chicago Sun-Times to work with the ex-homicide reporter, Dan Velasquez, who covered her case. Soon Kirby finds herself closing in on the impossible truth . . .

As a serial killer thriller, The Shining Girls is generically familiar and yet so very strange. Instead of the gradual unfolding of a crime (or crimes) that progresses the action while revealing the secrets of the past, here the chronology loops the impossible loop.

Let’s start with the familiar. Harper Curtis is the kind of serial killer with whom we are well acquainted. True to type, he begins young, torturing small animals as a distraction from his dismal domestic circumstances. As the plucky heroine who will survive his murderous attack and track him down to exact her revenge, Kirby Mazrachi is also immediately recognisable. So far so kind of Silence of the Lambs meets Girl With the Dragon Tattoo.

But here comes the strange: ‘The House’ somewhere on the west side of Chicago discovered by Harper, the drifter, on November 22, 1931. Not only is there a dead body in the hallway but there’s also a room upstairs where the names of the women Harper will kill in the next sixty years are scrawled on the wall, along with the trophies he will take from one murder victim and pass on to the next. Except none of this has happened yet. The House, seemingly, is a kind of tardis, only bigger.

Rather than the future, The Shining Girls is located in a recognisable past. Indeed it may be no coincidence that the main action of the book takes place in 1992, one year after the appearance of Thomas Harris’s Clarice Starling, Patricia Cornwell’s Kay Scarpetta and Lynda La Plante’s Jane Tennison. Serial killer victim and hunter Kirby Maztachi is very much of her time.

Harper Curtis, on the other hand, transcends time. While his modus operandi owes more than a little to the Whitechapel murders of Jack the Ripper, Harper is an even greater mythological threat. After first meeting his ‘shining girls’ in their childhood he will pursue them into their future in order to ‘close the circle’, as he puts it.

Lest this sound too discombobulating, what grounds The Shining Girls are the characters and the writing. Initially frustrated and not a little confused by the impossible chronology, Beukes had me riveted by her attention to historical detail and her imagery.

Meeting the little girl Kirby in July 1974, Harper is a tad disappointed to discover that her eyes are brown – not blue like the ocean. Brown, he thinks, pursuing the aquatic metaphor, ‘is the colour of shrimping, when the mud is all churned up in the shallows and you can’t see shit for shit’. Kirby’s eyes give nothing away.

As for the history, we first meet Harper in 1931 in a depression-era shanty town where he kills an old women for a coat and discovers the key to the House in the pocket. After ripping his Achilles tendon in the struggle to get away, Harper seeks treatment at the Mercy Hospital, bursting to the seams with the luckless victims of the economy. Here he encounters the dancer suffering from the effects of the radium with which she paints her body every night to perform naked on stage. She too is rooted in the history of this era, as Beukes tells us in the acknowledgments which reveal the depth and extent of her endeavours to bring history alive.

By turns brilliant, brutal and riveting, in all its puzzling mystery, The Shining Girls is testimony to the promiscuous hybridity of the contemporary crime novel. Read it and wonder.
A version of this review first appeared in the Sydney Morning Herald.