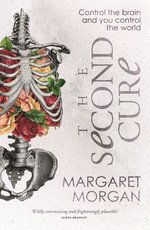 A pandemic is racing through our world, changing people subtly but irrevocably. The first sign for some is losing their faith. For others it comes as violent outpourings of creativity, reckless driving and seeing visions.

Scientist Charlotte Zinn is close to a cure when her partner becomes infected. Overnight her understanding of the disease is turned upside down. Should she change the path of evolution?

As Australia is torn apart, reporter Brigid Bayliss is determined to uncover the dark truth behind the religious response to the outbreak.
Brigid and Charlotte find themselves on the frontline of a world splintering into far left and far right, with unexpected power to change the course of history. But at what cost?

Dark, thrilling and compulsively readable, The Second Cure is a provocative debut about control, courage and belief.

Margaret Morgan’s ambitious and remarkably prescient novel deals with a virus sweeping the world. This subject, speculative when the book was published in 2018, is now of course a grim reality.

The Second Cure explores the consequences of this virus on family, community and society. It’s a novel of ideas, making social and political points and posing important ethical questions about the objectivity and responsibilities of scientists.

Part 1 of the novel introduces Charlie Zinn, a biologist researching a cure for a new virus that, having killed the cat population, is now transferring itself to humans. The virus affects people in different ways. Some, like Charlie’s partner, Richard, become synaesthetes, experiencing unusual (and often welcome) sensory connections, which heighten their sensuality and creativity. Other victims suffer darker consequences: some lose their faith, and some believe they have already died.

Meanwhile, a right-wing pastor named Jack Effenberg has become Premier of Queensland. Brigid Bayliss, Richard’s sister, is a journalist reporting on Effenberg. Brigid is becoming concerned about Effenberg’s increasingly restrictive policies and about the influence of his ultra-religious wife, Marion.

Then there’s Winnie Bayliss, mother of Brigid and Richard; Tricia Townsend, an officious acquaintance of Winnies; Shadrack Zinn, Charlie’s scientist ex-husband; and an assortment of other family and social connections, all of whom become affected, in various ways, by the virus and by the rising influence of right-wing forces. As the virus spreads, they are pushed closer and closer to extreme – and sometimes destructive – action.

Part 2 of the novel takes up the story fifteen years later. Charlie and her team have developed a vaccine against the virus but many infected people choose not to use it. Social fractures between the left and right have widened. In some countries, right-wing pockets have seceded from larger countries and this is true of Australia, where Jack Effenberg has established the Republic of Capricornia, a militaristic zone with echoes of both The Handmaid’s Tale and Nazi Germany. In Capricornia, those suffering the virus are considered unclean, are arrested and disappear.

Brigid Bayless’ attempts to expose Effenberg place her in increasing danger. Gradually her path and Charlie’s intersect as they both, in their own ways, become forces of resistance against what they discover to be horrifying crimes against human rights. To say more would be to offer spoilers.

The Second Cure is complicated, and it’s a slow burn. Morgan, who, besides being a criminal lawyer has a degree in Advanced Science in Biology, clearly knows her stuff. The scientific terms and explanations, more frequent towards the beginning of the novel, demand concentration. So do some of the short pieces interspersed with the narrative, and which include, for example, extracts from (fictional) academic papers, newspaper reports and essays. The effect of these pieces is to emphasise the widening effects of the virus and the social reaction to it and to associated political changes.

The novel leaves you with a lot to think about. This is not cookie-cutter crime fiction: there’s no single murder, no detective, no comforting resolution. Its scope is wider than that. It’s about our current political and social situation, and the fragility of liberal and compassionate life. The Second Cure is an act of protest. It’s a warning about the growing power of the alt-right, the ease with which freedoms can be eroded, and the possibilities of science in the fight to improve the human condition.