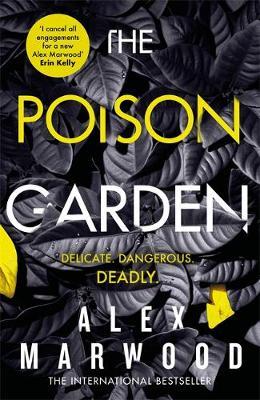 Where Romy grew up, if someone died you never spoke of them again.

Now 22, she has recently escaped the toxic confines of the cult she was raised in. But Romy is young, pregnant and completely alone – and if she is to keep herself safe in this new world, she has some important lessons to learn.

Like how there are some people you can trust, and some you must fear. And about who her family really is, and why her mother ran away from them all those years ago.

And that you can’t walk away from a dark past without expecting it to catch up with you . . .

Alex Marwood doesn’t waste any time getting into the thick of it in the opening chapter of The Poison Garden. Police in Wales have been called to the property of a survivalist cult where they find most cult members in an advanced state of dead. The cause of the slaughter – suicide or murder – is unknown and it takes almost the whole book to arrive at the final answers.

That’s absolutely not a problem, because so many more questions are asked and answered along the way that the build-up of tension is perfect.

The story alternates between the aftermath, set in 2016, and the years leading up to the mass deaths. Marwood keeps all those tense lines singing, carefully sifting through the layers of events, relationships, rivalries, assumptions and misinformation until the final devastating note.
In 2016, the story is told largely by the only adult survivor, Romy, who was found in the infirmary with a badly broken leg, and her aunt, Sarah, who takes in Romy’s half siblings. Sarah and her recently horribly deceased sister, Alison (known as Somer to the cult) grew up in a strange cultish Christian group of their own. Everyone is odd in this family, and she’s hard pressed to teach the children how to behave like normal people when she feels so far from normal herself.
Meanwhile Romy is learning how to fake normal, especially when ‘the Dead’ (which is how the survivalist group viewed anyone from outside their compound) keep expecting her to be grateful to be back in ‘the real world’. She is keeping more than one secret, including the fact that she’s pregnant.

The flashbacks depict an intriguing optimism of the doomsday cult, but also the decay of that optimism into petty and cruel powerplays, bullying, control and abuse. Its members are sometimes naïve, sometimes hard, sometimes both at once, and you can see immediately how it might appeal to some and yet fall prey to corruption.

The Poison Garden is gripping and compelling in its portrayal of people who have been subject to particular mindsets all their lives – not only the cult survivors, but the ‘Dead’ who surround them. The cult’s planning to survive the apocalypse has a certain resonance here in March 2020, with the pandemic shutting down so much of what we’ve always considered normal in our world.
Marwood has some very neat twists and unexpected reveals along the way, in both past and present, and the result is a powerful story where things are very far from black and white, and motivations and fates are not always what they seem.