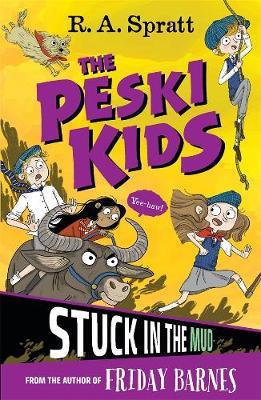 Things are about to get messy for the Peski Kids as mud-run madness descends on Currawong!

Chaos parachutes into Currawong when the annual Mud Run hits town. The Peski kids are soon swept up in the festivities. Or in April’s case, strapped to a vision-impaired competitor in the race.

Can Joe beat the fierce opposition? Can Fin hit Joe with a giant mud ball? Can April make it through a school day without getting expelled? Who knows? But when the prize money goes missing someone has to figure out what really happened under all that mud!

This is the third Peski Kids adventure, featuring Joe, Fin and April Peski, and it’s a lot of fun.

The three children and their father are in hiding from a sinister organisation known as the Kolektiv. Their mother is imprisoned in a secret European jail; their father has just proposed to Ingrid, the Swedish au pair from next door; and Ingrid and her charge, Loretta, are now moving in to their house.

It’s a lot of drama for the small town of Currawong.  But there’s more excitement to come when Brad Peddler from the Mad as Mud company (and ex-Currawong resident) announces the annual Mad Mud Mud Run.  Not only is the usual $10,000 being offered for the first male across the line, but there’s also a competition to design the course itself.

As if that isn’t enough, two-time Olympic silver medalist, Maya Dharawal, makes a dramatic parachute entrance to announce she will compete in the Mud Run, and also run training camps for any woman who wants to take part “to shine the light of fairness on the equality of this competition”.  April is outraged to learn that the prize for the men is five times that of the women.

Fin is determined to win the course design competition.  Joe is under pressure to win the race from not just the reluctant sponsor (Mr Chelsea, the baker) but also the school and April, who wants him to split the prize money with the female competitor who comes first.  And April finds herself tied to a vision impaired boy called Tom (both literally and figuratively).

And then, during the big race, the bank is robbed…

This is a fast paced book with fun characters and entertaining dialogue (especially from April – that girl has attitude to burn)!  A very enjoyable MG read.