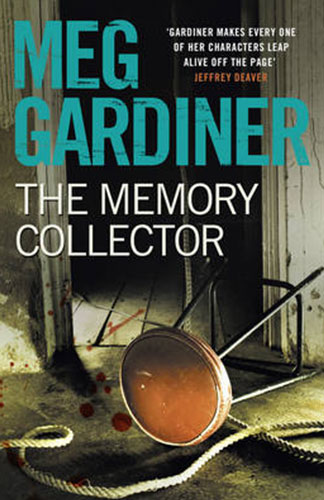 Author: Meg Gardiner
Publisher: Harper Collins
Review by: Jacqui Horwood
Copyright Year: 2010
Book Synopsis:
he Memory Collector is the second instalment in the Jo Beckett series. Beckett is a forensic psychiatrist living in San Francisco and first appeared in The Dirty Secrets Club (Hodder and Stoughton 2008). Her job is to profile the lives of victims of unusual deaths to determine whether their deaths were natural, accidental, suicide or homicide. It’s an interesting twist on the current crop of forensic/psychology based crime fighters and Jo Beckett is a well constructed, three dimensional character with foibles and demons of her own.

With The Dirty Secrets Club there was an element of the unbelievable which I was happy to overlook because of the relentless pace and tight writing. This time around however I found myself shaking my head and thinking ‘as if’. The story revolves around Ian Kanan who is suffering the same sort of anterograde amnesia as Guy Pearce’s character did in Memento, and an unstable biological agent called ‘Slick’. Beckett is called in when the rambling and incoherent Kanan causes problems on a flight from London. It is up Beckett to discover what has destroyed Kanan’s brain so that he cannot make and retain new memories and why he seems to be on a mission. The plot is fast paced but ultimately too way-out to be believed.