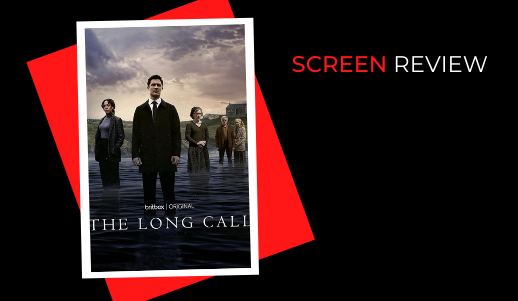 This is a moody drama with the typically bleak British seaside setting. SBS is dropping an episode a week so this review is written without watching the final episode. To find out what happened, I read the book. That provided a whole new perspective on the TV series.

The crime drama is in Detective Inspector Matthew Venn’s search for the killer of a man found stabbed on the beach. The personal drama is in the steps towards a potential reconciliation with his mother. It’s a slow burn with subtle acting.

The series is based on the Ann Cleeves’ book of the same name. It’s the first story in a series, introducing a new lead character, Matthew Venn. Without any spoilers, Matthew is a now happily married gay man living on the Devon coast but he was brought up in a religious sect based in the area. Loads of material there.

The TV series was developed and written by Kelly Jones. Unusual to get a series up and running with a woman at the helm in both roles. She has strong credentials (Des, Baptise and Call the Midwife). She has produced a very watchable show that has a similar feel to the Vera series.

Adaptations always require some changes. The book’s characters’ internal conflicts and their (or the author’s) comments and generalisations have to be presented in a different way.

Detective Matthew Venn, played by Ben Aldridge, is the strong silent type. The silence is informed by flashbacks and conversation with his husband, but the viewer inserts their own interpretation. His conflict with his mother and the baggage from the sect are well represented. I missed the more nuanced elements of his character, such as his need for order. In the book, he loses his ability to think clearly when in a messy environment. I’ll be looking at the last episode, it may be there, in the background, and I missed it.

Matthew Venn’s second in command is a single mother DS Jen Rafferty, played by Pearl Mackie. She played Bill Potts in Dr Who. As an actor I like and believe her characters, they are flawed but good-natured. In both the book and TV series, she is a very good detective. In the book, she is a redhead who lightens Matthew’s life with her irreverence. On-screen, I felt that lightness when she appeared in a scene.

I don’t feel the same way about the cult leader, Dennis Stephenson, played by Martin Shaw. He is best known as Detective George Gently. I have a set against him because his ponderous voice gives him gravitas without earning it, but it’s perfect for this role. (As an irrelevant aside, his wife Grace is played by Anita Dobson who she is married to Brian May of Queen.)

The setting is exactly where Cleeves set the book, but the sensibility is changed. Or it had to me, it might be an Australian thing. Cleeves loves the coast and has set the story in spring. In the TV series, the sea is unrelentingly menacing. Characters comment on the beauty, and I know from multiple episodes of Escape to the Country that this is the English seaside playground, but there is no way, even without sharks, I’d be frolicking in that water.

Overall, I hope this is just the first in this series. I want to follow the characters and I know I can rely on Cleeves to provide a compelling story.

I can’t wait for 27 February for the start of Candice Fox’s Troppo (another adaptation for a compare and contrast) and a new season of Killing Eve – I’m never going out even when I can.

A call out to 7Plus for running women detectives on Wednesdays with Frankie Drake and Miss Scarlett and the Duke. I thought I saw that Ms Fisher’s Modern Murder Mysteries was returning as well but can’t confirm.