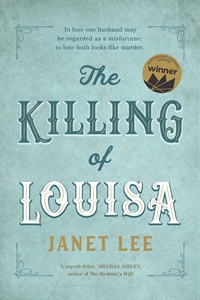 To lose one husband may be regarded as a misfortune; to lose both looks like murder.

In New South Wales in1888, Louisa Collins was sentenced to hang after being tried multiple times for the alleged murders of her two husbands. The testimony of her young daughter helped to decide her fate.

This clever and compelling novel recreates Louisa’s time in her Darlinghurst prison cell as she reflects on her life and on the grief and loss that delivered her to this place. Despite difficult marriages, financial hardship and the deaths of several children, she remains resilient and determined to have her own identity.

But as she faces her final days, will Louisa confess to her crimes? Or is an innocent woman about to be hanged?

The Killing of Louisa is a fictional retelling of a true story. The characters are real, the events all happened and, 130 years ago, Louisa Collins became the last woman to be hanged in New South Wales.

Debut author Janet Lee made the brave decision to tell Louisa’s story as a work of fiction. Through the use of first person narrative Louisa is talking to the reader from her prison cell. The story opens at the end of November 1888 in Darlinghurst Prison. Louisa has been arrested for the murder of two husbands and the suspected murder of her infant son. She has endured three trials where the jury found her not guilty and is about to go to trial for the fourth time.

Louisa is 41 years old when the jury in the fourth trial finds her guilty in early December and she is sentenced to be hanged. Back then they didn’t muck around; her execution was set for 8 January 1889.

Louisa is moved to a single cell for those last few weeks where a female warden watches over her 24 hours a day. It is in the hot Sydney summer, her bed is a straw mattress and her toilet is a bucket in a corner. On most days she visits with the prison chaplain, Canon Rich and it is through her recounting her conversations with him that we learn of her backstory.

The greatest strength of this book is that Janet Lee has nailed Louisa’s voice. It is a voice worn down by poverty, by being forced into a marriage with an almost stranger. Of a woman who had ten children, three of whom didn’t survive for long and whose loss broke something inside her. Of a woman whose own identity had long been lost behind that of societies expectations: wife, mother, invisible.

More than once I became angry at the treatment of women during Louisa’s lifetime. Her trial took place 14 years before women could even vote in NSW. Every single person who had a hand in the fate of Louisa was a man. And she endured four trials – four. Would the prosecutors have kept going indefinitely until they got the outcome they seemed determined to achieve? It seems so.

I had this weird feeling, as I read the book, that Louisa was sitting across the table from me, having a beer and telling me her story. Janet Lee found an almost intimate tone in the voice of this poorly educated, struggling to make ends meet, woman.

‘And then it is just Canon Rich I hear, and he is telling me to make my peace with God and not to be afraid. I hear a quivering in his voice.

I want to tell him that I am not afraid, because I shall yet be reprieved from this hanging, and given leave to live in the gaol. That the men who have brought my life to this point will suddenly realise the decisions they have made, and will call off this hanging. That at the last minute, the trapdoor will not open, and the Governor shall tell the hangman to lift the noose from my neck, and take the hood from my face.

I want to comfort the chaplain and tell him that all will be well, that I shall live in the gaol and my hair will grow long.

But I cannot speak.’

I read The Killing of Louisa in one sitting. And I cried. On the question of whether Louisa was guilty of killing one or both of her husbands, I’m not sure.

I wasn’t surprised to learn that Janet Lee won the Emerging Queensland Writer category at the 2017 Queensland Literary Awards. The Killing of Louisa is beautifully written, well paced and strangely moving. I can’t recommend it highly enough.