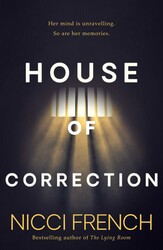 ‘So,’ said Mora Piozzi, her lawyer, looking down at her laptop. ‘In brief: you are charged with the murder of Stuart Robert Rees, on December 21st, between the hours of ten-forty in the morning and half-past three o’clock in the afternoon.’

Tabitha is accused of murder. She is in prison awaiting trial.

There is a strong case against her, and she can’t remember what happened on December 21st.

She is alone, frightened and confused.

But somehow, from the confines of her cell, she needs to prove everyone wrong.

Reviewer: Anne Buist (author of the Natalie King series and The Long Shadow)

Nicci French (a husband and wife team) have written 22 psychological thrillers and this is the latest due to be released on September 1st; thanks to the Sisters and Random House for this proof copy.

My elevator pitch for this book: Traumatised woman returns to childhood village to face her demons—only the main demon ends up dead and she’s put on trial for his murder.

Like all French’s books, there’s a crime and psychological aspects, less in this one of the thriller style of the earlier books and more in keeping with the Freida Klein series in that respect. There is a murder of which the protagonist, Tabitha, is accused of, and she ends up having to defend herself, and solve the crime from within prison. In addition to the restrictions of being in prison, having no friends, family or money, the town where the crime occurs is tiny—and has been cut off from the rest of the world for the time period when the murder was committed—by a huge tree falling over the road. The reader hears from each of the characters as they arrive for a prison visit…or when one new friend visits the town and reports back. We keep getting pieces of the puzzle and in this way it feels like a good old crime novel where we are pitting ourselves against the author in trying to find out who did it—and right until the end we know it could be the protagonist herself.

The main character is Tabitha, pretty much alone in the world, her parents having died and no friends because she is very prickly.

We get to meet a few other inmates at the prison—one becomes her support in court, but none of these characters have a strong presence. One turns up unexpectedly and jolts the reader as much as it might have Tabitha.

The other strong characters are from the village, and add a Mid Somers murder feel; the female vicar, the dead man’s wife and son, the farmer, the old school friend. Most had motive as it turns out…

This is set in three locations—the prison and the court primarily, with flashbacks and CCTV of the town where the murder occurred.

The prison experience as far as I can tell (I’ve visited inmates and watched movies and documentaries) comes across as mostly authentic…not too awful but bad enough, with the expected risk of being grassed on or assaulted and the mostly unsympathetic wardens. There is the warning of the bitch commandant but that never gets played out.

A reasonable knowledge of legal procedure is needed for the court scenes; I know more about Australian Law through my work and probably USA law because of podcasts, than British, but as the Australian legal system stems from the British, I would say the authors got this close enough to satisfy all but perhaps the most nit picky of lawyers. It is possible though rare to defend yourself in a murder case, and they make it suitably daunting and the defendant suitably overwhelmed at times to ring true. She certainly doesn’t turn into a lawyer overnight despite reading the ‘how to’ book, which would have been unrealistic. The ending…mmm maybe harder to believe but probably possible.

The other big component of this book is memory. A lot of authors use (lack of) memory in thrillers. I don’t find it especially satisfying or believable; this is on the cusp. Lack of memory is used to get her into trouble and she remembers things just when she needs to, though often to be fair jogged by CCTV or the other person’s recollections. People with histories of severe abuse can block out memories but it didn’t quite fit this character, but that said it didn’t overly distract from the story.

I think I’ve read them all French’s book except possibly the last which I must have missed and need to go back to; other than that there has been the eight books in the Freida Klein (psychiatrist) novels which I had a particular interest in because of my own professional background.

Despite reading all the Freida Klein series, I found the main character fairly irritating. I thought it was because I was being oversensitive to a portrayal of someone in my profession though I could never put my finger on what it was that was inauthentic. This book made me realise that wasn’t the problem! I also found Tabitha to be irritating and she and Freida overlapped in being contrary individuals with a sense of self-righteousness I feel is misplaced in both.

But the book is easy reading and draws you in, and the story keeps you turning the page. Despite being irritating, you can’t help but feel sorry for Tabitha and root for her when she has to defend herself in court (through being difficult but in a way that most people will understand at least in part—who of us could plead guilty if we were innocent?).

Did I pick who did it? No, the author won, but though I didn’t pick it, I found it a result with which I was content.