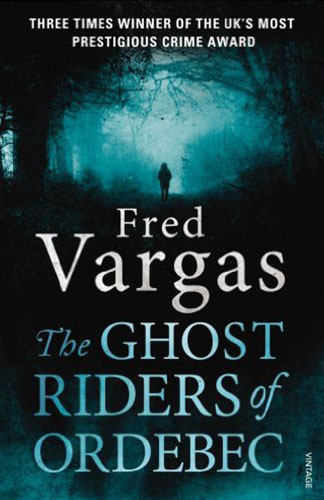 She refuses to speak to anyone besides Commissaire Adamsberg.
Her daughter has seen a vision: ghostly horsemen who target the most nefarious characters in Normandy. Since the middle ages there have been stories of murderers, rapists, those with serious crimes on their conscience, meeting a grisly end following a visitation by the riders.

Soon after the young woman’s vision a notoriously vicious and cruel man disappears. Although the case is far outside his jurisdiction, Adamsberg agrees to investigate the strange happenings in a village terrorised by wild rumours and ancient feuds.

Fred Vargas is a historian and archaeologist by profession. Through her books Vargas draws on the immense skills of her profession to weave a story of murder through Middle Ages myth and legend.

The novel opens with a bizarre murder where a man kills his wife with bread and then in an act of revenge drops crumbs on the floor. Monsieur Tuilot was an accountant for an insurance company but then retired and spent too much time at home with his overly clean and tidy wife, Lucette, to whom he had been married for 59 years. Monsieur Tuilot’s closest friends were two rats, Toni and Marie, that Lucette tried to kill, and his favourite past-time is doing crosswords, which he continues to do as Jean-Baptiste Adamsberg, from the Serious Crime Squad, questions him in relation to his wife’s death. Later in prison he will lead crossword teams to great heights. However, Tuilot is confident that he will not spend too much time in prison because he is cunning and then he’ll lead the life he wants without his wife’s recriminations. This scene seems irrelevant to the main plot of this book but throughout his next investigation, Adamsberg often has an insight into the current investigation by referring back to Monsieur Tuilot.

Adamsberg’s next investigation is bizarre and involves a legend and a vision that a young girl, Lina, has in which the Ghost Riders of Ordebec have taken four local men. Three she was able to identify but did not identify the fourth. Now one of the four men has gone missing and the local police are not interested even though they are aware that in the legend those seen in the company of the Ghost Riders will die. One of the men seen with the Riders goes missing but he is a very unpleasant man and no one is sorry he has gone, so there is little interest in finding him. When he is eventually found dead, the local police take very little interest. Then another two men ‘taken’ by the Riders are found dead. Everyone in the community is scared as no one knows who the fourth person taken by the Riders is and this puts everyone on edge and Lina and her family in danger.

Fred Vargas is very clever in the way in which she introduces a number of very interesting characters for Adamsberg to meet and interact with during his investigations. Nothing is gratuitous. If a character exists, even though they appear to be insignificant, they are there for an important reason and become a building block to the final solution.

Jean-Baptisite Adamsberg, is a very different detective in the way that he approaches each investigation. He is open to all ideas, which is a constant source of frustration to his team, who, despite this, are very loyal to him. His investigation are not linier, but at the end of his investigations it is easy to look back and see that his method was logical, just not explained to his team as he progresses his ideas, hunches, clues etc. The clue to a breakthrough is always his need for time alone to walk and think.

I am a devoted fan of Fred Vargas and I really enjoy Jean-Baptiste Adamsberg’s wisdom and curiosity, which always lead him to a good result, albeit by a circuitous route at times. Vargas is not a writer for those who enjoy police procedurals but if you enjoy learning something new through reading a good story then she is a must.