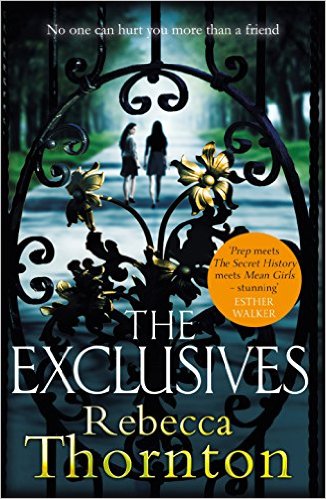 In 1996, Josephine Grey and Freya Seymour are best friends and on the brink of great success. Both are students at the elite private school Greenwood Hall and Josephine, the daughter of the advisor to the Prime Minister, is heading for everything she has ever worked for: Head Girl, Oxford, the demons of her mother finally abated once and for all.

But in 2014, Josephine is hiding in Jordan — and has been for eighteen years since those catastrophic events in her last year at school. And then one day she is found. Freya, whom she has not seen since those fateful four months, insists on meeting to revisit their difficult past once and for all and finally lay to rest the events that have haunted their adult lives ever since. But Josephine can’t bear to — it only took one night for their whole lives, friendship, and even selves to unravel beyond comprehension. They have done truly terrible things to one another in the name of survival. She most of all.

All she has ever wanted was to forget, but Freya is no longer willing to let her and now at last, Josephine is to meet her reckoning . . .

We first meet Josephine Grey, the book’s narrator, in 2014. She is an archeologist on a dig in Jordan and she has received an email from Freya Seymour, who wants to meet “even after everything that happened”.

The girls had both attended an exclusive girls boarding school and the book moves between the present and 1996, their last year at the school; the year that Josephine becomes Head Girl; when results were vital to obtain entry to their chosen university; and when competition was keen for the Anne Dunne Scholarship which will grant the recipient automatic acceptance into Oxford University.

Josephine and Freya had been best friends since their first year at the school but the friendship had ended bitterly after a tumultuous event on a night out celebrating Josephine’s appointment as Head Girl.  Because our narrator has no memory of the event – although she does know it was disastrous – we are also in the dark although as the book progresses we begin to suspect.

Josephine is desperate not to meet Freya. We learn the events of the year as we move between the claustrophobic atmosphere of the school in 1996, and an equally difficult and lonely environment in 2014 where Josephine is desperately trying to believe she has not inherited her mother’s illness.

I didn’t find it easy to like Josephine and yet I did feel sympathy for her.  Such is the clever writing of Rebecca Thornton.  All the characters are beautifully drawn; the angst of being 17, clever and coping with parental and school expectations is delicately outlined.

It is hard to believe this is Thornton’s first novel.  It is a thoroughly good read.