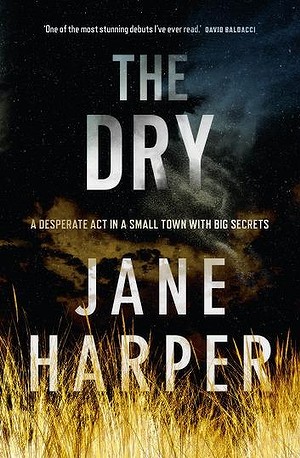 Luke Hadler turns a gun on his wife and child, then himself. The farming community of Kiewarra is facing life and death choices daily. If one of their own broke under the strain, well …

When Federal Police investigator Aaron Falk returns to Kiewarra for the funerals, he is loath to confront the people who rejected him twenty years earlier. But when his investigative skills are called on, the facts of the Hadler case start to make him doubt this murder-suicide charge.

And as Falk probes deeper into the killings, old wounds are reopened. For Falk and his childhood friend Luke shared a secret … A secret Falk thought long-buried … A secret which Luke’s death starts to bring to the surface …

Every now and then an Australian crime novel comes along to stop your breath and haunt your dreams. The Broken Shore by Peter Temple was one, Bitter Wash Road by Garry Disher another. Both are books that capture something profound about the Australian landscape and the people who inhabit it. Both are not just great crime fiction, but great Australian novels. The Dry by Jane Harper is another.

The expectations were always going to be high. The Dry won the Victorian Premier’s Award for an unpublished manuscript in 2015, has now been sold to 20 publishers worldwide and optioned as a film by American actor Reece Witherspoon’s company. Given The Dry offers such a telling account of community life in rural Australia during the worst drought for decades, one can only wonder whether a Hollywood transplant will take.

Australian crime fiction is at its best when contemplating what lies beyond the urban sprawl.  But what disorients the hopeful city natives seeking an “idyllic country lifestyle”, as federal policeman Aaron Falk observes, is the “crushing vastness of the open land”. Falk should know: he was born and bred in Kiewarra, a “tiny town” now “shimmering” under the relentless “day after day of blue sky”. At the age of 16, Falk left under a cloud of suspicion when one of his closest friends, Ellie Deacon, was drowned in the river, her pockets and boots packed with stones.

That river is now a dry bed of disappointment, as Falk  discovers when he returns for the funeral of another of his teenage friends. In an all-too-predictable rural tragedy, Luke Hadley has apparently killed his wife, his son and then himself in the deranged act typical of a farmer driven mad by despair and drought. At least that’s what the police from the nearest big town want to think.

Falk just wants to get in and get out – he’s counting down the hours. He’s keen to return to his neat flat in Melbourne (where the cleaners struggle to find enough to do) and his undemanding day job that involves “following the money” in financial investigations for the Feds. But it’s not going to be that easy. Luke’s parents want Falk to stay and clear their son’s name. They know that Luke and Aaron lied about their whereabouts at the time of Ellie’s death and it is time for Aaron to tell the truth and make amends. This involves untangling two crimes some 20 years apart. Flashbacks ensue. It’s a familiar strategy, but elegantly achieved.

Take the opening scenes. The arrival of the blowflies on the bodies at the farm is interrupted by the cry of the only survivor, Luke’s baby daughter, Charlotte. Cut to the unbearable funeral service with its three “awful” coffins and a punishing series of happy family snaps intended to honour the dead, but only serving to remind everyone of how much they have lost. The wake is even worse, as people struggle to control their grief and the tensions simmer. No wonder Falk is keen to leave.

But he doesn’t, taking up residence at the local hotel, where his encounters with the bartender and the locals recall favourite scenes from all the best kinds of westerns: the ones where a stranger rides into a lawless town, fronts the town bully, gets beaten up and abused (Falk’s car takes the brunt of the hostility here), but endures. There’s also that telling moment when Falk faces up to his teenage nemesis, Grant Dow: “Now older, fatter and with the faint whiff of chronic ill-health on the horizon, the bitterness seemed to seep from his pores.” You can smell the despair.

There is about The Dry something mythic and valiant. This is a story about heroism, the sins of the past, and the struggle to atone. But let’s not forget the redbacks, the huntsmen, the rabbit scourge and all that makes this a quintessential Australian story beautifully told.
This Review first appeared in The Age in June, 2016