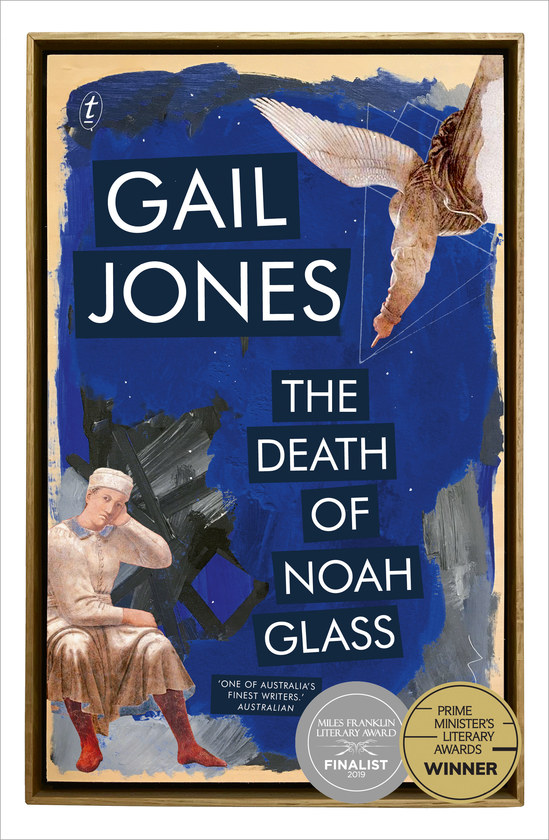 The art historian Noah Glass, having just returned from a trip to Sicily, is discovered floating face down in the swimming pool at his Sydney apartment block. His adult children, Martin and Evie, must come to terms with the shock of their father’s death. But a sculpture has gone missing from a museum in Palermo, and Noah is a suspect. The police are investigating.

None of it makes any sense. Martin sets off to Palermo in search of answers about his father’s activities, while Evie moves into Noah’s apartment, waiting to learn where her life might take her. Retracing their father’s steps in their own way, neither of his children can see the path ahead.

Gail Jones’s mesmerising new novel tells a story about parents and children, and explores the overlapping patterns that life makes. The Death of Noah Glass is about love and art, about grief and happiness, about memory and the mystery of time.

Gail Jones is celebrated as one of Australia’s finest writers, having won numerous awards for her previous seven novels and two short story collections. With The Death of Noah Glass, she subverts conventions of the detective genre and the result is another beautifully written and poignant literary novel.

The plot is constructed around the aftermath of Noah Glass’s alleged crime and unexpected death; it eschews the more predictable idea of Evie and Martin going to Italy to prove Noah’s innocence in a race against Detective Malone’s efforts to find proof of his guilt. Martin travels alone to Palermo and views the city from an artist’s perspective, with his knowledge of the art world and Noah’s place in it. Evie, who lives in Melbourne, takes up residence in Noah’s home in Sydney. In a twist on the ‘who dunnit’, the grief-stricken siblings each examine their memories of their father while immersed in the places he called home—who was he really?

Noah’s point of view is also presented, primarily focusing on a life-changing affair with art academic Dora in Palermo; his memories of his own childhood and father; and his last days alive in Sydney. These are not facts dug up by Evie or Martin and reimagined, but rather secrets Noah has taken to the grave, revealed in parallel with Evie and Martin’s memories and conjectures. The three separate story lines are adroitly handled and emphasise the characters’ separateness while adding to the novel’s poignancy.

Jones skillfully develops her central characters, all of whom— Evie, Martin and Noah himself— are complex, awkward, difficult, realistic people. They are presented with their flaws and insecurities fully exposed but with great tenderness. This is achieved in part by the characters remembering with guilt their own bad behaviour and pondering their weaknesses while recalling the more admirable traits of their loved ones. Further, there is a sense that the strange mystery they are forced to investigate provokes quite self-involved characters to treat each other with much more care and kindness. In contrast, Noah’s lover Dora is an enigma presented through the eyes of others; only after she meets both of Noah’s children are her thoughts about Noah and the effect of grief on her own life briefly revealed.

The novel is set in Sydney and Palermo, along with flashbacks to Noah’s time as a child living at a leprosarium in Western Australia; the descriptions are immersive. The use of an outsider’s eye is a clever device that allows for a natural focus on place and also the characters’ need to look inward. The author’s knowledge of art and the art world is impressive as is her research about the Mafia in Palermo and the leprosarium in Western Australia, both of which are important to character motivation.

Jones’s beautiful writing is a particular pleasure; through her evocative descriptions she has the skill to make the reader see things in a new way. For example, wreaths of roses on a coffin are ‘death-buoys’; Evie’s head is “glazed with seawater”; “his hands flapped like small wings”. Descriptions of the beauty in obscure things enhances the novel’s theme while simultaneously providing insight into the characters.

I enjoyed The Death of Noah Glass immensely. It’s a book to savour and contemplate rather than charge through, a complex, literary novel that begins with a crime and explores character, relationships, and the mystery of ever truly knowing those closest to us.