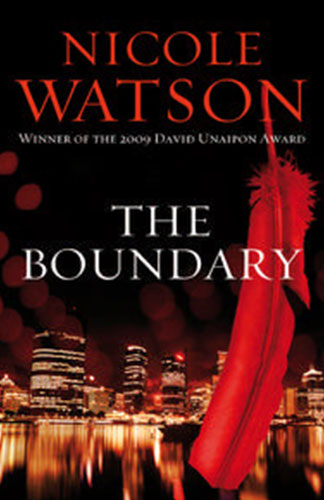 When the park becomes the site of a multi-million dollar development, the Corrowa People vow to fight and file a native title claim. Hours after rejecting the claim, Justice Bruce Brosnan is brutally murdered.

Some believe it is the work of an ancient assassin, returned to destroy the boundary.

THE BOUNDARY is the first novel from Australian author Nicole Watson.

Nicole is a member of the Birri-Gubba People and the Yugambeh language group and her novel is set in Brisbane, at the end of an unsuccessful land rights claim, soon after which high profile people start dying.

Reading this book it’s impossible not to be aware of some fundamental elements. There is a sense of anger in the book – anger at the treatment of an ancient people in their land and anger at the deprivation and desecration of those people. There’s also a sense of celebration – Aboriginal sensibility, thinking, belief systems, and society are clearly illustrated. That’s not to say that this is a saccharine view of life – there’s good and bad and right and wrong on both sides. There’s so much damage to many of the people in this book, but there’s also signs of self-reliance, repair and restoration. THE BOUNDARY is told in a style which has a real feeling of difference, choppy, abrupt, scathing as many difficult subjects are tackled – politics, land rights, alcoholism, dysfunction, family tensions and the difficulties that change continues to bring.

THE BOUNDARY is most definitely not a light and easy read, nor is it a perfect, flawless debut. The subject matter alone makes it confrontational, and the writing is often as abrupt as the content. It provides a real sense of the “other” with a glaring distinction between the mystical and reality which starts off feeling a little choppy, but does ends up making some sense. The use of the crime genre to tell this story rings true, the subject matter confrontational and whilst I did at one point think the writing a little patchy, the personal stories are strong, involving and very moving. So many aspects of the story THE BOUNDARY illustrates are raw and brutal, it does makes sense that the reader should sometimes be uncomfortable. It also makes sense that the flights into the mystical aren’t explained, it makes sense that the resolution solves the immediate problem and raises a lot more questions.

What THE BOUNDARY really did for me is make me hope like hell that more and more indigenous Australian’s set out to write their stories in their own language, and stylings, so that more and more of us can get an insight into the differences, understand the pain and get even just a glimpse of a reality which is quintessentially their own.