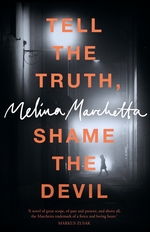 Bashir “Bish” Ortley is a London desk cop. Almost over it. Still not dealing with the death of his son years ago, as well as the break-up of his marriage.

Across the channel, a summer bus tour, carrying a group of English teenagers is subject to a deadly bomb attack, killing four of the passengers and injuring a handful of others. Bish’s daughter is one of those on board.

The suspect is 17 year old Violette LeBrac whose grandfather was responsible for a bombing that claimed the lives of dozens of people fourteen years ago; and whose mother, Noor, has been serving a life sentence for the part she was supposed to have played in the attack.

As Bish is dragged into the search for the missing Violette, he finds himself reluctantly working with Noor LeBrac and her younger brother, Jimmy Sarraf.

And the more he delves into the lives of the family he helped put away, the more Bish realizes that they may have got it wrong all those years ago, and that truth wears many colours. Especially when it comes to the teenagers on board the recent bus bombing. Including his daughter.

Tell the truth. Shame the devil. Bish can’t get Violette LeBrac’s words out of his head. But what he may get is some sort of peace with his own past as the worlds of those involved in two bombings, years apart, collide into the journey of his life.

After the popular and critical success of her contemporary, realist novels for young adults such as Looking for Alibrandi, Melina Marchetta produced a fantasy trilogy that was also favourably received. Now she has written a suspense thriller for adult and mature YA readers. Its title, Tell the Truth, Shame the Devil — a modification of an injunction voiced by the young Hotspur in Shakespeare’s Henry IV, Part I — foreshadows a tale centred on younger characters’ determination to speak truth to power and shame those perpetuating injustice.

In 2012 Marchetta told an interviewer that in the transition from contemporary fiction to fantasy she had kept to what she called her formula: big family dynamics, broken communities and a past that needs to be revealed before a future can be possible. Since in her own estimation she was not adept at inventing, she had relied on what she knew.

In her first venture into the suspense, detection and mystery zone, Marchetta again plays to her strengths. She applies her formula, focuses on her preferred demographic (adolescent students), and fuses these elements with the conventions of transnational thriller and crime investigation fiction. For Marchetta’s established readers, a good, long, engrossing leisure read is assured. The novel should also suit crime readers who are unfamiliar with Marchetta’s oeuvre but have an affinity with teenagers’ concerns and expect their police to recognise the impacts of violence on extended families and communities.

But what has Tell the Truth to offer readers who like their texts lean and mean, or rigorously unsentimental and cerebral, or models of elegant prose? For them, this book’s cover will be enough to raise the alarm. “Heart” and its compounds recur: heart-rending, heartbreaking (twice), heart-stopping, heart-pounding. Such language choices seek to pre-empt critique by compelling an emotional and non-analytical response from the reader and propelling the potential critic back to those days when calling a text “compassionate” was the highest form of praise. If such a wary reader can persevere through the initial four chapters’ hubbub, they may be sufficiently engaged by the storyline’s potential to go the full distance.

Marchetta’s narrative begins in hackneyed fashion. A rumpled, middle-aged police officer who is suspended for conduct unbecoming wakes hungover and alone in his neglected London flat and broods over his bills before receiving an unexpected phone call. A coach carrying British students in northern France has been bombed, and since the officer’s daughter is on a high-school tour of Normandy, she may have been hurt.

Typically a frantic drive would ensue, or the author would cut to the disaster scene. Marchetta, however, cannot resist introducing Chief Inspector Bashir (“Bish”) Ortley’s other connections first. There are the deceased son, the old school friend, the former wife and her new husband and unborn child. And there is Bish’s mother, whom he stops off en route to the Channel ferry to pick up. At the large campsite crime scene, where three people have been killed and four injured, Bish and his mother are relieved to be reunited with the physically unharmed 17-year-old Bee.

Marchetta sketches a score of people who are named and individualised. The teenagers are characterised with touching and often amusing detail, their speech rhythms, vocabulary and disrespectful attitudes credibly conveyed. Dialogue is a Marchetta strength. When Bish sees the name of one student, Violette LeBrac Zidane, he recalls a case he worked on, the bombing of an English supermarket 13 years earlier. Violette’s grandfather, who was killed in the incident, was deemed chiefly responsible. Violette’s mother has been in prison since she confessed to making the bomb.

Could this new explosion be a revenge attack, with Violette the intended victim? Or — as British and French security operatives are already asking — could fierce Violette be a terrorist? During the night, Violette and 13-year-old Eddie, a high-schooler of similarly “foreign” appearance, abscond. Taking on the multiple roles of the maverick investigator, Bish selectively complies with the dictates of the Home Office while also following up his own leads and reviving inquiries into the past atrocity. Characters’ connections stretch to Egypt, Algeria and country Australia; however, Bish’s endeavours are confined to rushing around within England and northern France, his diplomatic mother serving as his sidekick.

It is face-to-face conversation, handwriting, tabloid reporting and personal communications devices all the way, with rarely any scrutiny of anything scientific or polysyllabic. When Violette’s mother shows Bish a postcard on which her daughter cryptically vows “I’m going to shame the devil’’, the probability firms that the fugitives are on a mission. Other fairytale and quasi-mythological components of Marchetta’s plot include a baby given away, young children taken from parents, lovers separated, an emblematic watch, and the scorned hailed as heroes. Solutions can be secured with magical speed: for instance, when a beautiful junior lawyer is unfairly sacked, leaving her free to pursue retrospective justice for her family, she acquires the necessary help (a research clerk and a human rights barrister) within the space of a page, and to boot is offered money to live on while she pursues her cause.

The desired outcome has not been achieved when Tell the Truth ends, but in Marchetta’s universe helpfulness and hope are so ubiquitous that nothing less than success can be ­anticipated.

This review first appeared in The Australian on September 17, 2016