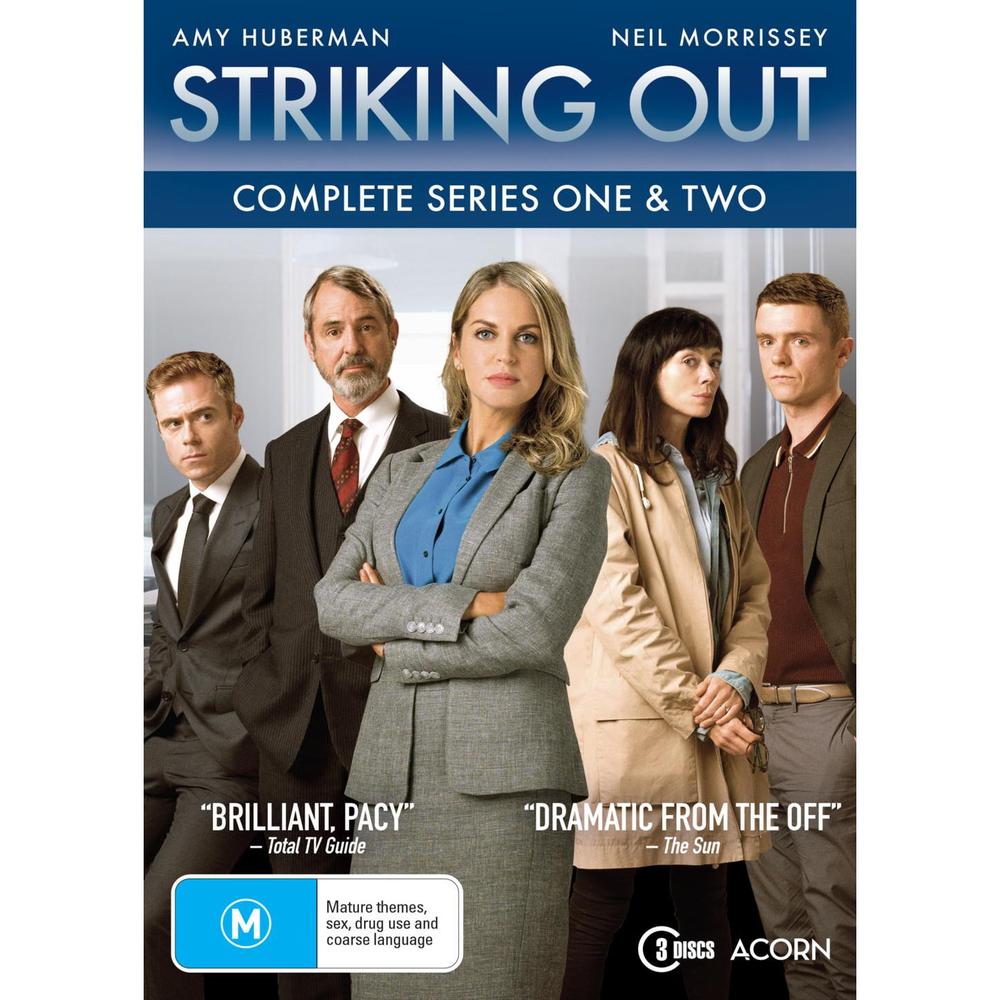 Striking Out, a two-season Irish legal drama (Acorn TV, and Apple TV), is the TV equivalent of comfort food: nourishing, not too demanding, and very enjoyable. No wonder it drew incredible ratings for Irish channel RTE when it first aired in 2017.

For Tara Rafferty (Amy Huberman), life is good. She’s a young lawyer working in a prestigious law firm in Dublin. Not only that but she’s engaged to Eric Dunbar, son of the firm’s owner – until, on her hen’s night, she catches him in bed with a work colleague. (This happens so soon after the show starts that it’s not a spoiler).

Tara leaves Eric and the firm and sets up shop in the back room of a café. In no time at all she’s acquired a young offsider, ex-client Ray Lamont (Emmet Byrne). Tara and Ray, together with rackety mentor Vincent Pike (Neil Morrissey) and investigator-cum-IT whiz Meg Reilly (Fiona O’Shaughnessy), begin to attract clients and win cases.

Striking Out follows the tried and true ‘case per episode’ structure, underpinned by longer narratives which play out across the whole series. They include Tara’s love interests; attempts to discredit Tara and force her out of business; Tara’s parents and their problems, and, most important, an enquiry into government corruption. These longer plot arcs provide a hefty dose of tension and they, together with some competent acting, add interest to what might otherwise be bland fare.

Production values are excellent and Striking Out looks slick. A main delight is the way it features Dublin: shots of city intersperse the action and street scenes give the show a great sense of place.

Season 1 of Striking Out consists of four and Season 2 of six episodes. Apparently the show hasn’t yet been renewed for a third season and that’s a disappointment because it ends on a cliff-hanger.

I do recommend Striking Out. It’s the show to turn to when you’ve had enough grit and noir and are looking for something kinder and warmer. One piece of advice, though – watch with subtitles. For the most part the actors are Irish and some of them have very strong accents.

Striking Out is streaming on Acorn TV.