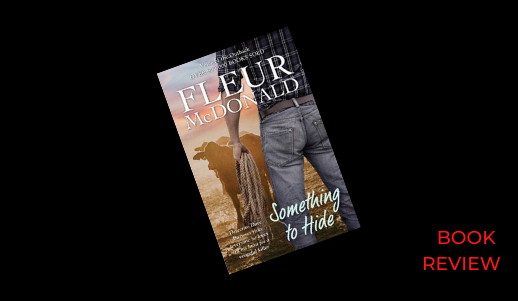 With the sickening realisation that his cover has been blown, Detective Dave Burrows knows his family is in serious danger from the vicious stock thieves and murderers, Bulldust and his brother Scotty.

Devastating news brings Dave back to Barrabine, where circumstances force him to question his determination to stay in the police force. How could he live with himself if anything happened to Mel and the kids?

Mel, understandably frightened, must decide who she’ll listen to. Can she trust Dave to handle this threat hanging over their family, or is her father right to argue that she should leave her marriage immediately?

With her acclaimed skill for tension and drama, Fleur McDonald has delivered another richly compelling story in Something to Hide.

Something to Hide is the fourth book in the Young Detective Dave Burrows series featuring Dave in the lead role. I had no trouble reading Something to Hide as a standalone book – there was enough background about each character for me to easily follow the story.

This rural suspense novel features Dave and his first wife Mel. It is set in the early 2000s in Perth, and Barrabine a fictional country town in WA is loosely based on the Kalgoorlie-Boulder area. The writing conjures an authentic rural feel of the area: red dust, hot dry days and cold nights. McDonald wastes no time and jumps straight into the story. Mel and Dave’s marriage is on shaky ground, and bad guys Bulldust and Scotty, featured in the previous book in the series, are still on the run. They are dangerous, calculating and menacing criminals who disappear after nearly killing Dave. But Bulldust resurfaces and approaches Mel in her local supermarket.

Dave is attempting to catch the dangerous Bulldust and Scotty but finding them in the bush proves a hard task. He’s partnered with an older cop, Bob Holden, and the two men are sent to Barrabine to investigate cattle theft where they interview a few interesting characters and sift through financial records. Dave finds it hard to focus on the investigation, worried and frustrated about his family and failing marriage.

I really loved the character of Spencer, an old cop, not long off retirement, and Dave’s mentor. The relationship between Dave and Bob is almost a father/son relationship. Bob calls Dave “son” all the time which I found endearing at first but began to grate after a while – my only tiny gripe about the book.

McDonald gets straight into the story which builds quickly into a tense game of cat and mouse. The book was hard to put down and moved at a cracking pace. The author knows her stuff, and her farm experience and working with livestock makes for an authentic reading experience.

The character Dave Burrows has a lot of fans which is why McDonald wrote this series, and readers will not be disappointed. McDonald has a great blog where you can find out all about Dave and her other books www.fleurmcdonald.com

I give this book 5 stars.