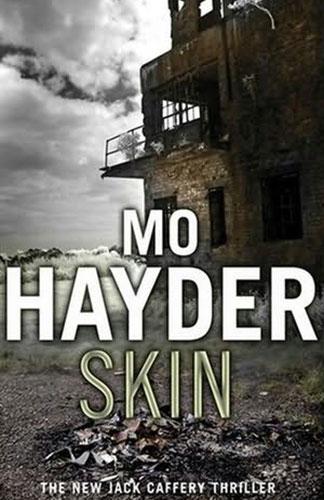 Skin is the fourth in Hayder’s Jack Caffery series, and clearly follows close on the heels of the previous offering, Ritual, as it refers to events from Operation Norway, which occurred earlier in the same week. Hayder also has two stand alone novels – Tokyo and Pig Island.

Skin’s point of view switches between Hayder’s two main characters – Caffery, a DI from London who has transferred to Bristol to the MCIU (Major Crimes Investigation Unit), and Flea (Phoebe) Maloney, police diver.

The main story revolves around the missing girlfriend of a footballer. There is also another missing woman who is eventually found as a suicide. All resources, including the MCIU, are thrown at the celebrity case. There are inconsistencies in the suicide’s case, but only Caffery is interested in them. He also remains obsessing over elements of the Operation Norway case, which is officially closed. He feels that he is being watched and gnaws at the details of the case like a sore tooth, worrying that something was missed. There’s also a niggle in the back of his mind, which he refuses to consciously acknowledge, of monsters from Tanzania.

Flea and her team are called in to search local quarries and lakes for both the missing girl and the footballer’s girlfriend. Through the weak and selfish actions of her brother, Flea finds herself in an unimaginable situation, which worsens as the story unfolds. We are forced to ask what we would do in a similar situation with Flea’s particular expertise.

Hayder’s characterisations are superb. Caffery has a past (don’t they all?) which is lightly sketched but which has clearly been dealt with in detail in previous novels. Caffery and especially Flea, are well-drawn, sympathetic and likeable characters. Through Flea, we delve into often unsavoury world of police diving, which seems to be uniquely represented here. The decomposing, leaking bodies Flea and her team are routinely called out to clean up wouldn’t make one rush out to become a police diver.

It is always difficult to pick up a novel in a series midway through, especially when something quite dramatic has happened in the preceding book. Skin is very well-written and overall well-paced, although I found it lagged a little in the middle. What it did make me want to do is immediately go out and track down the previously novels. The ending leaves open some interesting questions to be followed up in her next novel, and reveals her characters to be not so black and white.