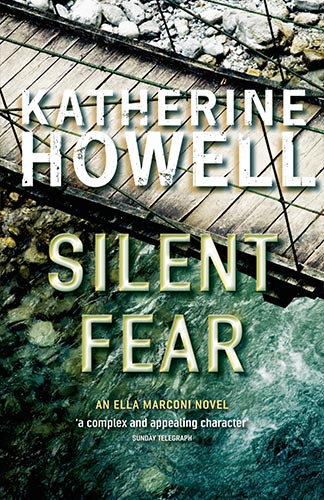 In the case of SILENT FEAR I just could not stop thinking how glad I was to be a reader and not a writer. Honestly, how do these people come up with such consistently good characters and excellent plots? Howell makes her life that little bit more difficult by always bringing in a Paramedic thread, mostly with new characters each book, weaving what happens to them on the job into the plot of an excellent crime fiction / police procedural book. Even allowing for a background as a paramedic, I’ve no idea how she consistently builds these plots, creates these characters and writes these tremendous books!

In SILENT FEAR the connection between paramedic Holly and the police investigation into the shooting death of Paul Fowler is multi-faceted.

She’s one of the crew called when he collapses in a park, only to discover a bullet wound. Another connection is her estranged brother Seth, best friend of Paul, on the scene in the park when the shooting occurred. Things get even more complicated once her background starts to reveal, and her fiancé gets involved.

In Holly, Howell has again created a very interesting, fleshed out and realistic character. Her story is cleverly woven into the ongoing police investigation, ensuring that the reader gets a real chance to connect with her, whilst never feeling that the book is wandering off the point. Readers have had the earlier books in the series to really get to know Detective Ella Marconi, the lead voice in the detective group investigating Fowler’s death. Marconi does seem to be getting an easier time in SILENT FEAR than she has in the earlier books. Aside from a bit of grief from a slimy new colleague, which she’s handling, and her partner’s worry and lack of communication, her ongoing relationship with her parents is considerably simpler (in this book they are cruising around New Zealand making lots of ship to shore calls to keep in touch), so everything’s pretty smooth on the Marconi front.

There is, however, a great cast of supporting police – male and female – with a good, solid combination of angst and normality in the entire group, leading to more than a sneaking hope that there could be an ensemble building.

One of the things that Howell does particularly well is to balance the personal and the professional, the paramedic and the cop lines. At no point do you feel the action wandering, or stalling, or wading around in uninteresting waters. There’s no misdirection or padding in any of these books, and markedly so in SILENT FEAR. The story clipped along at a good pace, the author’s not been afraid to cause her characters some serious angst, and it’s possible for a reader to get a strong feeling of connection. The only downside, and a very very minor one at that, seemed to be the drawing together of a couple of plot lines that didn’t quite work – perhaps because it seemed to be a unnecessary?

But seriously, the only real downside to SILENT FEAR is that you’re going to have to be prepared before you start. It’s flagged as “A Book You Can’t Put Down”, and they mean that. Emphatically.