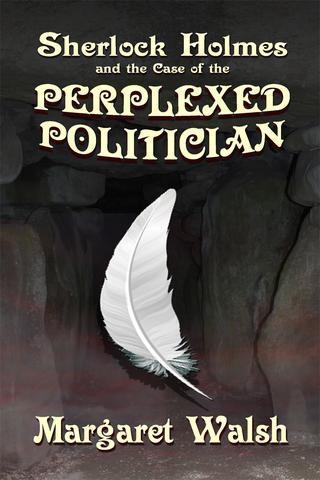 When the fiancé of the sister of a Member of Parliament is found dead in mysterious circumstances, the man turns to Sherlock Holmes and John Watson to get an answer to the puzzle. Journeying to the small Wiltshire village of Barrow-upon-Kennet, Holmes and Watson are soon deep into a murder investigation. With few clues and a mounting death toll, Holmes and Watson realize that they are facing something much more sinister than a perplexed politician.

This energetic and imaginative offering is extremely entertaining. It takes us, together with Sherlock Holmes and Dr Watson, at the instigation of Mycroft Holmes himself, on a wild ride through the quiet backwaters of a Wiltshire village to the odd assortment of people staying at the local great house, Barrow Hill Manor, in whose grounds the body of an MP’s sister’s fiancé has been found. The lady has already been involved in one scandal, not of her own making, in London, and her brother wants this matter, deemed an accident by the local constabulary, investigated for his future career and her reputation.

There is here enough of interest to entice the great detective from his rooms, although he is not overly interested in the ancient burial mounds, or barrows, that dot the Wiltshire countryside, or the impressive collection of flintstone tools collected by the manor’s owner, Sir Denby Hardcastle. He is more interested in the odd inhabitants of the manor. If you want to solve the mystery, you might pay attention to the extraordinary names they exhibit. I shan’t give them away; but, once they are attached to heroes of classical myths, they at last provide Holmes with elucidation which at first escapes him.

It is not uncommon for the great detective to be puzzled by a case, although he does not always proclaim it quite so often as here.  Walsh makes a good fist of incorporating Holmes and Watson into the story, although I was denied the pleasure of finding out what Holmes wore, in particular, had he donned his travelling coat and deerstalker appropriate to the country for this outing? We never find out what he wears. What we have instead are elaborate descriptions of the food provided by the inn at which they are staying in the village. Dr Watson is characteristically a good trencherman, being an ex-army doctor, but Holmes, who usually eats nothing but, instead, envelops everything in clouds of pipe tobacco smoke when he’s perplexed, here eats like a horse. Perhaps it is the country air and the amount of walking they are required to do which gives him an appetite.

The fiancé’s accidental death proves to be murder and, in short order (it’s not a long book) several more, increasingly melodramatic and gruesome, deaths, even worthy of Midsomer Murders, mount up at the manor house. If the old pony, who travels thirteen miles in a trap between the inn and the manor, starts tired, he must be exhausted by the end, by which time the carnage is so great that almost anyone would have a fifty-fifty chance of guessing who dunnit. In a thrilling ending, however, Holmes pins the right killer with his usual finesse. What he does not do is repeat his maxim that he believes worse things go on in isolated country houses that they ever do in the crowded streets and stews of London, but he well might have done with this one.

This is a game book, a good read, by a writer who is worthy of a much better editorial attention than she got in order to remove repetitions, infelicities, and misspellings (e.f. ‘journies’ for ‘journeys’). If Holmes had remarked one more time on anything ‘drily’, I would have taken him a glass of water myself. But don’t let that stop you from having a fun romp with the icon of detection, some weirdos, lively writing, and several breath-taking flights of fancy.