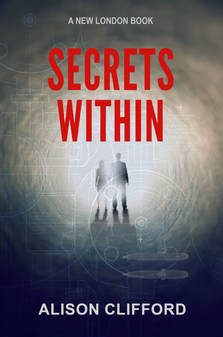 Ditched by the love of his life, Andrew, a US Navy lawyer, takes time off to spend with his sister, Nell. When he succumbs to temptation on the journey to Nell’s home, the resulting one night stand with a grey-eyed woman leaves Andrew torn and confused.

Andrew’s holiday is soon disrupted when an officer on the submarine commanded by Nell’s husband is caught with stolen plans. As a favour to his brother-in-law, Andrew agrees to act on behalf of the accused officer. A specialist team of NCIS agents is called in to lead the investigation—the ex-love of Andrew’s life among them. And the local NCIS agent assisting them?The grey-eyed mystery woman—Tait.

As the investigation proceeds, what started out as a straightforward case becomes complicated, as long held secrets are revealed one by one. The key to solving the puzzle proves elusive, until one tiny piece of information exposes the biggest secret of them all.

This the second novel in the New London Books series by Alison Clifford. Clifford writes romantic thrillers, and she has also published three novels in the White Rose Series.

The New London submarine base is the setting for Secrets Within.  On board the submarine, SS Scottsdale, an officer is discovered loading secret information on to his computer, and commander James Morgan acts immediately to have the matter investigated by the NCIS. Meanwhile, Andrew Campbell is taking three weeks leave from his position as Navy Judge Advocate General and is staying with his sister Nell, who is married to James Morgan.  Through this connection, Andrew’s holiday is cut short when he is asked to defend Tom Parsons, the officer accused of espionage.

Much of the story is concerned with Andrew’s romantic life. In chapter one we see him devastated at having his offer of marriage turned down by an NCIS agent, Sue. But en route to stay with his sister, Andrew has a one night stand with a budding karaoke singer, Tait, and he is still trying to understand his feelings for her when he discovers that she is also an NCIS officer, and has been brought to help with the investigation.

As romance develops between Andrew and Tait, the investigation uncovers compromising free sex in the New London navy community and it’s only after two deaths, that Tait identifies a surprising suspect and the NCIS is able to conclude the investigation.

The emphasis in this book is on plot rather than style, but there is enough here to engage readers of the romantic thriller genre.