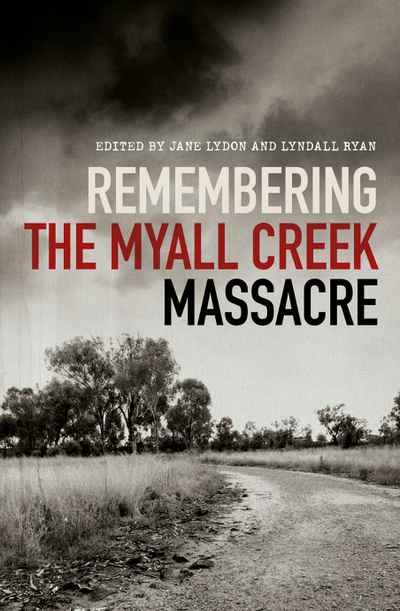 The 1838 Myall Creek Massacre is remembered for the brutality of the crime committed by white settlers against innocent Aboriginal men, women and children, but also because eleven of the twelve assassins were arrested and brought to trial. Amid tremendous controversy, seven were hanged. Myall Creek was not the last time the colonial administration sought to apply the law equally to Aboriginal people and settlers, but it was the last time perpetrators of a massacre were convicted and hanged.

Marking its 180th anniversary, this book explores the significance of one of the most horrifying events of Australian colonialism. Thoughtful and fearless, it challenges us to look at our history without flinching as an act of remembrance and reconciliation.

‘I know in my own case when people say “just move on” you can’t move on unless there is some acknowledgement and sense of remorse expressed because if you are constantly told “it is not important” you can’t move on. You are basically accused of worrying about nothing, as if aboriginal lives are not important.’

Indigenous reconciliation is often a fraught subject with phrases like ‘move on’ or ‘we weren’t responsible’ sometimes thoughtlessly bandied about. Remembering the Myall Creek Massacre edited by Jane Lydon (Wesfarmers Chair of Australian History at the University of Western Australia) and Lyndall Ryan (Conjoint Professor History in the Centre of the History of Violence at the University of Newcastle) turns a reader’s mind to this topic and to contemplation of the impact of Colonialism on Australia’s Indigenous population. The book is an interesting and thought provoking compilation of essays centred on the massacre of unarmed and peaceful Wirrayaraay people.

On 10 June 1838, a group of 11 armed settlers and convicts, thought to have been led by John Fleming, rode onto the traditional Country of Wirrayaraay people and murdered approximately 30 people: mostly women, children and elderly men. The Wirrayarray were bound by the hands and neck with leather rope and walked away from the station and killed: shot, decapitated and hacked to death with cutlasses. To cover their crimes, the perpetrators returned the following day and burnt the victims’ bodies.

Apart from the brutality of the act, the Myall Creek Massacre is memorable because white perpetrators were brought to trial and white men testified regarding acts of brutality committed against the Wirrayarray people. Eleven of the twelve culprits were tried; seven were hanged, although the ringleader John Fleming escaped trial and conviction.

As colonialists pushed into Indigenous land, frontier violence became common. Many witnesses to massacres similar to that at Myall Creek were Indigenous and therefore precluded from giving evidence. What distinguished the Myall Creek court case from previous trials and trials that followed were the witnesses: white men who were brave enough to testify.

William Hobbs, a white station manager, not only reported the Myall Creek Massacre to authorities but also testified against fellow white men. The case caused a deep divide in the colony: some people, angered that white men were on trial for aboriginal massacres, raised funds for the accused men’s defence while others such as Eliza Hamilton Dunlop, author of the poem The Aboriginal Mother, highlighted the plight of the Indigenous population. After the Myall Creek trial, no further white men were convicted of murdering aboriginal people.

The essay ‘Walking on Bones’ was particularly interesting, exploring the impact of violence and genocide on not only the victims but also on future generations. When crimes are unrecognised or refuted, victims and their families suffer doubly; the implication being their lives are of little worth. ‘Many aboriginal families have stories relating to the Frontier Wars and events are also recorded in the archives of Australia, but there are still people who either do not know or refuse to accept this history.’

Mark Tedeschi, in the Afterword, likens to two Myall Creek trials to modern-day war crimes trials and believes the ‘hangings of seven of the perpetrators of the massacre merely served to drive future murderous acts underground, so that more surreptitious means, such as poisonings, were used instead of brutal, bloody slayings by sword or bullet or herding over cliffs or into swamps.

My knowledge of atrocities committed against Indigenous people is limited. Indigenous history, throughout my school years, was not part of the history curriculum and I suspect many adult readers would have little knowledge of the Myall Creek massacre and similar atrocities suffered by the Indigenous population. Remembering the Myall Creek Massacre although academic in style is easy to read and enlightening. Occasionally I found some of the content in the essays repetitive, however, overall I would highly recommend the book. Recognition is the first step towards understanding and reconciliation. A must read.