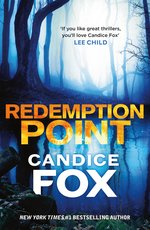 Redemption Point picks up where Crimson Lake left off. Former policeman and suspected paedophile Ted Conkaffey is still hiding out in a crocodile-infested swamp in the far north accompanied by his adopted family of geese. We know he’s a good bloke, not just because he tells us so, but because he’s converting a child’s cubby house into a new roost for his flock. It’s an arresting intro featuring barking crocodiles, familiar geese foraging for bugs in Ted’s hair, and a vengeful attacker with a baseball bat. Evidently, it’s time for Ted to reckon with his past, once and for all.

Having already made her mark on the Australian crime-writing scene with the prize-winning trilogy, Hades, Eden and Fall, and having scored a lucrative co-authorship deal with best-selling American author James Patterson, Candice Fox is successfully surfing a crime wave of her own making. This is well deserved, since she is an original voice in Australian crime fiction, not least because of her unique insight into the plight of those who fall between the social cracks.

In conversation with Richard Fidler on the ABC in 2017, Fox described the extraordinary childhood that has informed her fiction. While her father was a parole officer in Long Bay Jail, her mother was the rescuer of stray animals and children, fostering more than 140 kids over a five-year period. Family outings involved doing the rounds of the council clean ups, collecting hub caps, mannequins and any other oddities that her mother fancied. Tales of hapless miscreants, abandoned children and creative recycling thread their way through Fox’s tales drawn from the dark side.

Fox revels in darkness. In Redemption Point, she confronts the troubling topic of paedophilia head on. While Ted may not be a paedophile, the treatment that is meted out to him by those who believe he is demonstrates how incomprehensible and repulsive people find this crime. And Fox delves into the psyche of a young paedophile as he confides in the reader about the desires that have lead him astray.

While Ted’s efforts to redeem himself and to reconcile with his wife and baby daughter comprise the narrative engine of Redemption Point, it is his working relationship with the “strange tattooed pixie”, Amanda Pharell, that provides the entertainment as well as the oddness.

Amanda is also an outcast – she has served a prison sentence for murder. Fox is careful not to spell out the circumstances, so it’s still worth backtracking to Crimson Lake to find out why. Together, Ted and Amanda are a sharp investigative team although as Ted notes, while Amanda can be “brilliant in the throes of a case” she is also “as annoying as a poke in the eye in equal measure”.

Whether it’s stitching up Ted’s wound with fishing line in the bath, or rapping on the crime scene at the Barking Frog Inn where two young bar staff have been shot, the unpredictable Amanda steals the show. As Ted suggests, while Amanda’s “social-emotional barometer” may have been “bashed around” in prison, he is not convinced that it had “been firing on all pistons” even before then. Amanda is indeed odd.

And then there’s Detective Philippa Sweeney, the cop in charge of the Barking Frog case. She too has a crime in her past with which she has to deal, along with the interfering Amanda to whom she is strangely attracted. There’s a lot going on in Redemption Point and it’s well worth the visit.