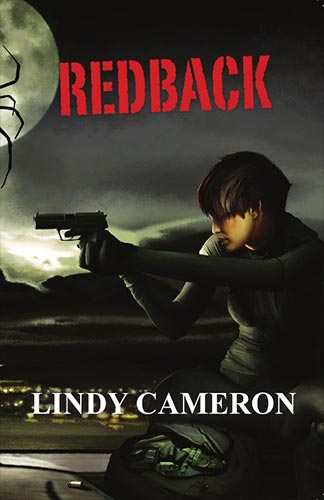 Author: Lindy Cameron
Publisher: Clan Destine Press
Copyright Year: 2010
Price: 29.95
Review By: Phyllis King
Book Synopsis: Commander Bryn Gideon and the crack Australian ‘Redback Retrieval Team’ rescue hostages from Pacific island rebels. American journalist Scott Dreher, researching computer war-game training, uncovers links between Western government agencies and known terrorist groups.
Meanwhile ritual killings in London and Tokyo, a bomb on a European train, an assassination on an Australian beach, and an attack on a US army base have half the world on high alert. The question is: are these incidents the work of isolated opportunistic terrorists, or part of something more sinister?

Unfortunately, it is not so easy to review since the fun comes from the twists and turns, the surprises and the excitement which keeps you turning the pages when you should be washing the dishes, milking the cow or deadheading the roses.

An intricately plotted and sophisticated thriller, Redback grabs the reader from the opening line: “It was the last good night of Lord James McQuade: he’d been wined, dines and royally screwed.” And so we’re off on a journey which takes us from London to Texas; from Tokyo to Wellington; and all places in between.

Commander Bryn Gideon from the covert Redback organization, and her crack ‘retrieval agents’, rescue from a Pacific island a group of hostages, the most important of which is Dr. Jana Rossi. Bryn, Jana and the reader don’t know why that might be.

At the same time, Scott Dreher, investigative journalist and sophisticated computer gamer is introduced to a private version of a game he already has, GlobalWarTek. Unaccountably this particular version includes information about arms deals, terrorists and questionable government dealings.

Deciding to pay a visit to Japanese software designer, Hiroyuji Kaga, to see if he can help with an explanation, Scott doesn’t realize he is setting off on a race against an unknown adversary (or adversaries) who doesn’t hesitate to kill to maintain the deadly conspiracy.

This is a great read which demands your concentration and assumes a knowledge of the world in which we now live. The pace is fast but totally engrossing. The writing is tight but the humour lifts the tension. Great dialogue and watch out for appearances by craftily disguised former Australian government ministers now languishing on the back benches.

There is only one good thing about getting to the end of the book. The last line seems to promise that we shall see more of Bryn Gideon and Redback. Let’s hope that is indeed the case.