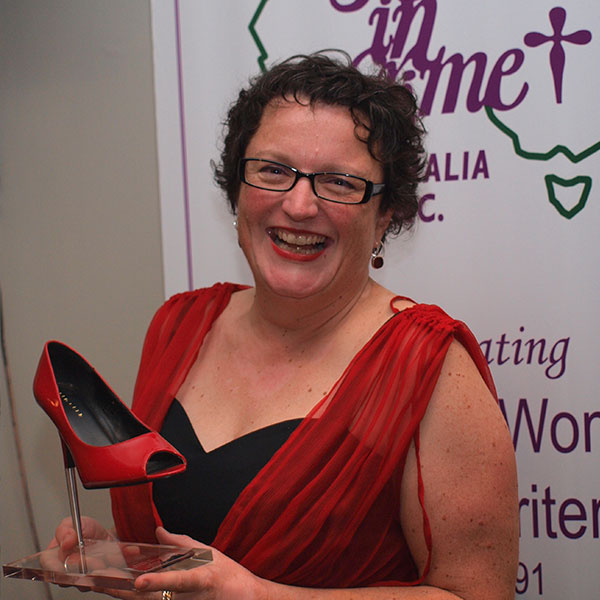 Red shoes according to the Hans Christian Andersen fairytale were the ultimate vanity and cursed the wearer. In the Tom Waits’ song, Red Shoes by the Drugstore, Little Caesar gets caught stealing a diamond ring for his baby all because “he loved the way she looked in those red shoes”.

Red shoes, it seems, bring only trouble—unless you’re one of the 14 women who has won the Scarlet Stiletto trophy for best unpublished short crime fiction since the award was launched by Sisters in Crime Australia twenty years ago.

Essie Davis, star of Miss Fisher’s Murder Mysteries, will present the 20th trophy at a gala dinner in the Thornbury Theatre Ballroom at 6.30pm Friday 22 November.

“This single event set me on a path which hasn’t petered out yet,” Cate Kennedy says of winning the inaugural Scarlet Stiletto in 1994 for her story “Everything $2.00 On This Rack”.

An unknown at the time, Kennedy has since been published across a range of genres, winning a dazzling array of literary awards.

“What made the difference,” she says, “was the attitude of the women I met in the Sisters in Crime. They seemed to just assume I’d be writing more, and that basic faith in my writing did more for my confidence than anything else had to date.”

Kennedy’s is not the only writing career nurtured by the Sisters in Crime through the annual Scarlet Stiletto Awards short story competition.

“Back in 1994, we believed the Scarlet Stiletto would be a dagger with a difference – and so it has proved,” says Sisters in Crime national co-convener Carmel Shute. “To date, 2,538 stories have been entered and 17 award winners have gone on to have novels published.”

Shute says the awards originated from a meeting over a few glasses of wine about the difficulties facing female aspiring crime writers.

“Despite the success of writers like Claire McNab, Kerry Greenwood, Susan Geason and Marele Day, women crime writers still lacked proper recognition in Australia,” Shute says. “The Sisters in Crime saw the Scarlet Stiletto Awards as a way of cutting through the discrimination.

“We came up with the concept first, then cast around for a suitable name. We settled on Scarlet Stiletto, which we saw as a feminist play on the traditions of the genre. The stiletto is both a weapon and a shoe worn by women. And of course, the colour scarlet has a special association for women.”

The competition is open to women residents of Australia. All stories must contain an active woman protagonist and a crime/mystery theme.

The augural Scarlet Stiletto Award offered $625 in prize money. This, $7,000 is up for grabs, with awards offered in 13 categories in addition to the coveted first prize trophy.

The basic design of the trophy – a scarlet shoe with a steel heel stiletto plunging into a mount – has changed little since 1994. Most of the trophy shoes are sourced second-hand or bought on sale. One was found abandoned in a gutter in St Kilda.

The Best New Talent Award is sponsored by Kennedy, who won a second shoe in 1995 for “Habit”—the first of five women to date to win two Scarlet Stilettos, although the only one with a matching pair.

“I was a bit concerned winning a pair, because they sat there on the shelf looking strangely disturbing. The stiletto metal heels reminded me of the story of the Little Mermaid, for whom every step on her new human feet was like walking on sharp knives,” Kennedy says. ”But nothing could have been further from the truth: far from losing my voice as she did in the fairy tale, it turned out that I’d found mine.”

Past winners speak overwhelmingly of the role of the Scarlet Stiletto Awards and the Sisters in Crime in giving them the confidence to write.

Josephine Pennicott won first prize in 2001 for “Birthing the Demons”, a story inspired by the treatment of the mother of one of the children who murdered two-year-old James Bulger.

“Winning the shoe sustained me throughout many periods of doubt,” Pennicott says, “a huge confidence boost whenever I sat in my writing shed wondering if I should abandon the dream and take up gardening instead.”

Pennicott, who has published a trilogy of fantasy novels and whose Tasmania-based mystery Poet’s Cottage, recently attracted a bidding war in Germany, won a second shoe in 2012 for “Shadows”.

Other mismatched pairs have been won by Christina Lee, Roxxy Bent and Janis Spehr.

Winning third prize in 1998 was enough to convince me to persevere with writing crime, and the main character in my story, Jayne Keeney, went on to become the hero of my three PI novels based in Thailand.

Ellie Marney left her husband and a plumber dealing with a rat’s nest in the walls of her home in rural Victoria to attend the Scarlet Stiletto Awards dinner in 2010.

“The Scarlet Stiletto became the most important win for me ever,” she says of taking home the trophy that year for “Tallow”. “Without it, I never would have had the impetus to begin my YA crime novel Every Breath (published in September). Now I’m commissioned to write two more in the series, and I have an honest-to-goodness writing career. It’s something I’ve wanted since I was old enough to hold a pencil. So I worship the shoe!”

Amanda Wrangles’ 2009 winner “Persia Bloom” was the first story she’d ever shared outside her writing group.

“Winning stepped everything up a few notches,” Wrangles says. “I finally found my ‘thing’. My red shoe will always be special to me as the beginning of it all.”

But the benefits of the awards extend beyond book deals.

Evelyn Tsitas won the Dorothy Porter Innovation Prize in 2007, before taking home the Scarlet Stiletto in 2008 for “Undeceive”, a story in verse.

“Winning the coveted red shoe opened doors within the crime writing sisterhood, and also gave me the confidence to stamp myself with the ‘crime writing’ brand even though I haven’t had yet had a crime fiction book published,” Tsitas says.

“The win gave me the confidence to believe in myself,” says Jacqui Horwood, who won in 2003 for “Slasher’s Return”’. “It hasn’t translated into published books and million dollar deals, but when I’m doubting myself, a glimpse of that red shoe is a reminder that I can do it.”

Aoife Clifford won the red shoe in 2007 for “Kill-Dead-Garten”, was runner-up in 2009, and has three other prizes.

“Without that I would still be trying to write a crime novel but I wouldn’t have been so prepared to share my writing with the outside world,” Clifford says. “I probably wouldn’t have had work published, been shortlisted for the Debut Dagger in the UK and won a Ned Kelly. Winning was a shot in the arm but, even more importantly, a push in the back to see where my writing could take me.”

Perhaps the most apt metaphor for what the Scarlet Stiletto Awards have meant for so many of us comes from my seven-year-old, who recently confessed she and her friends play a game with the trophy I won in 2011 for “The Teardrop Tattoos”.

“We pretend it’s a magic shoe,” she says. “You put your foot in and make a wish and it takes you wherever you want to go.”

Angela Savage is the author of the Jayne Keeney PI series set in Thailand and is a member of Sisters in Crime Australia.